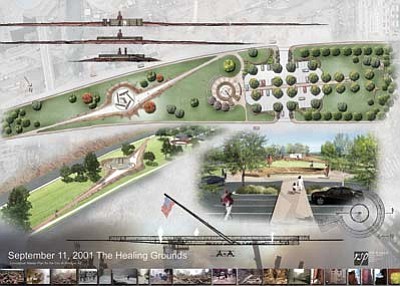 Submitted Photo<br> The above plans show what the memorial will look like when it is finally completed.

WINSLOW, Ariz. -Winslow has always been very involved with anything that relates to the attacks that occurred on 9/11, and that doesn't just stop with the yearly memorial they have.

Many people are aware of the Sept. 11 memorial on the east side of town, but the memorial is going to have to move, which leaves room for improvements to be made.

"This new project began because the existing monument, at its current location, will most likely need to be moved to make room for intersection improvements," said City Planner Paul Ferris."

This move promises to be a huge blessing, because there is so much that can be done with the new monument when it is moved in between east and west bound lanes of old Route 66. It will allow for there to be designated parking and pedestrian access, which is not available at the current memorial.

"The concept of this memorial is to recognize all the people that were involved in the tragedy and the clean up and recovery efforts that followed," said Ferris. "Because no such monument has been built yet."

The plans for the new memorial hold a lot of significance for the events that happened on that terrible day.

"The base of the memorial is in the form of the Flight 93 impact crater," said Ferris. "We decided to go with that because that represents the foundation of the country itself, people who are sacrificing themselves for freedom and justice. Within in that there will be four concentric rings that will represent the four flights that crashed that day."

"Within those circles will be the foundation of the pentagon and the walls have been fractured and form a pinwheel, which allows visitors to event the center where there will be a representation of ground zero which will be the columns extending up in the middle," said Ferris. "On the outside of the pentagon walls there will be the times and the events that occurred that day. Such as the first tower impact, the second tower impact, the crash into the pentagon, Flight 93 and the last wall will represent the recovery efforts. On the inside of the walls will be the names of those people killed on that day, the other four walls will have the names of those in the recovery efforts and first responders who later acquired fatal conditions."

Outside of the immediate monument will be another area more directly representing New York.

"In the picture you see a structure that is very close to the parking lot, and in that we are memorializing the way that the New Yorkers honored the tragedy of 9/11 every year," said Ferris. "The center of it will be a tilted flagpole, which was the subject of three firefighters raising the flag in front of the destroyed background. The tilted pole will be used as a sundial as well, around the flag the times will be represented with empty shoes to represent all the people that suffered during that day. One example is the 9:30 impact on the pentagon, and that time will be represented by baby shoes because the youngest immediate victim on the plane was a two year old."

There is no official start day for the project due to funding needs, which the city hopes can be raised through grant funding and community donations.

The memorial promises to be very moving and a great representation and a way to honor all the people who were involved on the defining day.