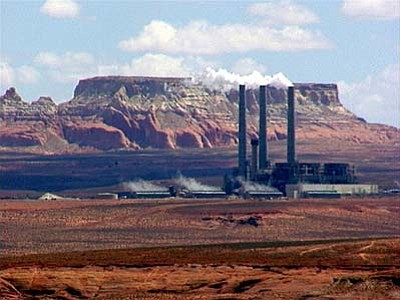 Even after six years as communications director in the Navajo Nation president's office, I knew little about the Navajo Generating Station (NGS) except for what I read in the newspapers.

When the federal EPA announced it would decide next year whether NGS would have to install $1.1 billion in more equipment in hopes of improving regional air visibility, I didn't know whether that was good or bad. All I knew was it's a decision that could force the plant's six owners to close it down instead.

So this summer I asked NGS managers to hire me to tell their story, and they agreed. Here's what I found out.

NGS is critical to the Navajo and regional economy. Its annual operating budget is $700 million. Every year, $140 million of that goes to paychecks, tribal royalty payments, a scholarship program, community contributions. Its workers donate more than $157,000 through payroll deductions to local charities. Without NGS, all of that revenue would be gone and not replaced.

NGS is diligent about Navajo preference. It employs 543 full-time workers. Of those, 83 percent are Navajos and that number is increasing. In the last 10 years, NGS has hired more than 250 new Navajo employees as part of a transition to a new and younger work force. During overhauls, 90 percent of the temporary workers contracted to do the work are Navajos.

Training at NGS is among the best in the energy industry. Each new Operations and Maintenance employee goes through a difficult seven-week-long Power Plant Fundamentals School. Once they graduate, those assigned to the railroad or maintenance departments take an additional three-week course. Those assigned to the Operations Department take an additional five-week course. In July, the last class graduated 17 students - all Navajos. That tied for the second largest graduating class in the 35-year history of the course. Training, continuing education and certification is continuous and never ends for each employee.

Safety at NGS is an industry model. NGS is currently in its longest period of no time lost due to accident in its 35-year history. Safety is integrated into every process. A culture of safety-consciousness is continually developed through training and leadership workshops. Employees take safety principles home with them. Safety is always paramount.

NGS has one of the best pollution control records in the energy industry. It was the first coal plant in the U.S. built to comply with the 1969 National Environmental Protection Act and the 1970 Clean Air Act. NGS's electrostatic precipitators remove 99.5 percent of all particulate matter.

In 1991, NGS negotiated the Navajo Visibility Agreement with the Grand Canyon Trust and the Environmental Defense Fund, which was signed by President George H. Bush. The visibility agreement is acknowledged as prototype of industry, environmental and government cooperation.

At the time, the EPA originally sought a 70 percent reduction of SO2 emissions. NGS instead agreed to a 90 percent reduction. Measurements show that since the scrubbers were dedicated in 1999, NGS technology has continuously removed 95 percent of the SO2.

In 2002, Platts Power Magazine recognized NGS for having the lowest SO2 emission rate of any facility in the nation greater than 300 megawatts. It was also recognized for the amount of energy it generates and its reliability.

According to the 2010 census, more than half of the 303,000 enrolled Navajos now live elsewhere. People leave Navajoland for education, military service, and especially employment. When they go, they take their language, culture and way-of-life with them. Lack of employment on the Nation contributes to the erosion of Navajo tradition and the rise in serious social problems. But when many Navajos are leaving and not coming back, workers at NGS stay for 20, 30, even 40-year-long careers.

The Navajo Generating Station is a major player in Arizona and a major player on the Navajo Nation - economically, socially and culturally. As an energy producer, it has operated efficiently, reliably and environmentally responsibly. As an economic anchor for almost four decades, NGS has kept Navajos employed in good jobs close to home.