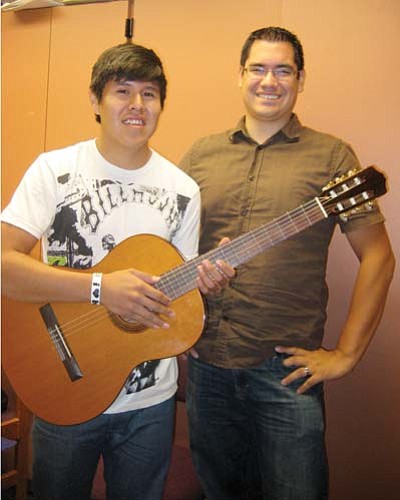 POLACCA, Ariz.-Hopi High School music students participated in the Native American Composer Apprentice Project (NACAP) for the eight year in a row as the students composed for renowned string quartets that performed at Hopi High School and the Grand Canyon.

NACAP is part of the Grand Canyon Music Festival which has professional native performers go to native schools for a couple weeks to teach students how to compose for string quartets.

Trevor Reed, who is Hopi, was the professional composer at Hopi High for his second straight year. He is also a bassist. He has a Bachelors degree in music composition from Brigham Young University. He is currently studying ethnomusicology at Columbia University in New York City. He serves on the Hopi Tribes Grants and Scholarship Program and the First Nations Composer Initiative.

Reed said teaching the Hopi students composing this year was an excellent experience.

"It was out of the ordinary because every student had a different style and technique from hip hop to classical.

"We're looking for more students for next year. They should talk to music teacher Tom Irwin," he said.

"All seven had their pieces played. Some were better than others, but they were all outstanding. Each piece was quite different and represented different musical ideas," he said.

Irwin said the Hopi High students who repeated the program from last year wrote better because of their experience. He said Barton and Nevayaktewa were outstanding.

Irwin was also impressed with the experience the students obtained through this program.

"It was an amazing opportunity to work with a professional composer. These students already read music, but now they were able to write for a string quartet and work with world leading musicians and hear their pieces performed," he said.

Irwin noted that the students rehearsed all day at the Grand Canyon before the performances.

"That helped them refine their work. It was an amazing opportunity," he said.

"Reed is good with the kids. He's kind and accomplished. The kids learned from him," he said. "He's a good teacher and works well with the kids."

The Grand Canyon Music Festival has been recognized by the President's Committee on the Arts and Humanities.

Claire Hoffman, artistic director and steward of the mission for the Grand Canyon Music Festival, said the program that has been going for 27 years has done a good job with outreach to students.

"We have created a culture of composing on the reservation," Hoffman said.

The program has won state and national awards. Arkansas has started a similar program modeled after Arizona.

Hoffman said she was able to get Reed into the program because he's her neighbor in New York City.

"Imagine running into a Hopi composer on Riverside Drive in Manhattan. He's a wonderful role model for the students," she said.

"The students responded well," she said about Reed's teaching. "The quartet was impressed that it took the students only a week to write their compositions."

Hoffman, who plays the flute professionally, said when she was a music student she had the late Andrew Lolya as a mentor. She always asks how he would approach a musical composition and hopes to bring similar music teachers to native students so they can have the same type of musical mentors.

"He had a zen way of looking at life. He was like a shrink--honest and warm," she said.

Although music runs in Hoffman's family, she is the first professional.