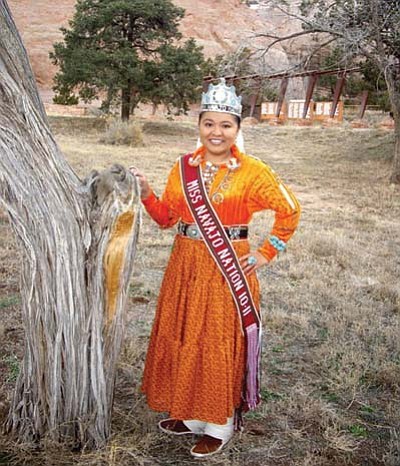 Submitted photo<br> Miss Jumbo is extremely proud of her accomplishment, and hope to do her people proud

Winifred Bessie Jumbo, Miss Navajo Nation 2010-2011 will be giving up her title as the ambassador for the Great Navajo Nation on Saturday - September 10, 2011 at the 65th Annual Navajo Nation Fair at the capital of the Navajo Nation Window Rock, Arizona. Miss Jumbo has been an advocate for Education and Language preservation for her platform. She has visited many schools across the Navajo Nation and presented her Senior Thesis at Harvard University and University of Massachusetts. - Freshman Year Navajo Preparatory School - Class of 2006 Valedictorian Brown University - B.A. in Anthropology, B.A. in Ethnic Studies , Honor Thesis Award, Joslins Award

Throughout my reign as Miss Navajo Nation I would like to share my educational and personal experiences with the Navajo people to inspire and motivate young individuals to set positive goals and accomplish them. Also, I would like to challenge everyone to learn their Native languages and to make an effort to learn about their Native cultures and philosophies. One day I hope to become a professor of American Indian Studies, which will be my contribution to resolving the limitations and problems in American Indian Studies programs in higher education. I would like to share a unique I would like to see Navajo scholars utilize their unique backgrounds as a foundation for success and motivation to increase the number of Native American students in universities and colleges across the United States of America.

I will not forget the troubled and forgotten youth of the Navajo Nation and I will make it my priority to help these young individuals succeed, so that we can all live by the teachings of Sá'ah Naagháí Bik'eh Hózhóón and T'áá Hó Ajít'éego.