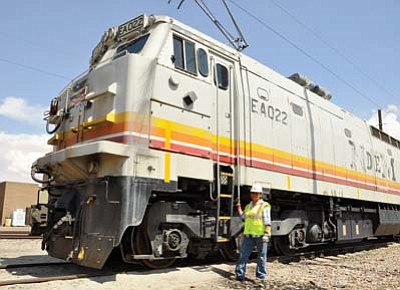 Photo/George Hardeen<br> Judy Moffett is the first woman and first Navajo to become a train operator for the Black Mesa Lake Powell Railroad. Every day, the railroad delivers 26,000 tons of coal from the Peabody Energy twin coal silos along U.S. 160 to the Navajo Generating Station at LeChee.

These 78 miles of tracks across the Navajo Nation exist for one purpose: to transport coal from Peabody Energy's twin coal silos 20 miles southwest of Kayenta to the Navajo Generating Station at LeChee.

Thirty years ago, Judy Moffett was the only woman and the only Navajo to become a train operator.

After working to become an under-ground miner, with plans to go to either Moab, Utah, or Grants, N.M., she asked her father what to do.

Take your credentials to the Navajo Generating Station where he had worked, he told her. And so she did.

Soon she found herself studying to become a train operator. Today, she is one of eight coal train operators at NGS, and is helping to train others.

"I like being out here every day, able to make decisions on my own," she says. "It's a good job."

The BMLP Railroad makes three trips daily to deliver 24,000 tons of coal to the power plant. The train passes slowly beneath the coal silos which load 100 tons of coal into each of as many as 88 coal cars.

When the train arrives back at NGS, the coal is dumped at the unloading loop from the bottom of each coal car into a hopper, and is transported to the plant or to storage.

NGS maintains a month-long supply of coal but in the past has stored as much as three months' worth.

After an intensive seven-week long course in power plant fundamentals, those assigned to the railroad take an additional three-week course in railroad operations, a weeklong driving course and heavy equipment operation training in order to qualify for work on the railroad and in the NGS coal yard.

"People do aspire to be a train operator. It's a good paying job," said David Tso, NGS Operations & Maintenance manager for the railroad. "It is a specialty all its own. There is a skill set that a person has to acquire. There are a lot of rules and regulations they need to follow. They have to know the train, know what it can do and can't do."

Tso said operators have to be able to control the train over varied terrain, be attentive to hazards, particularly at railroad crossings, be aware of how the train is running or not running, and make decisions quickly if an emergency occurs.

The BMLP Railroad was built before the Navajo Generating Station began operating in 1974 in order to have a supply of coal ready when the power plant went online. For a while, coal was delivered by truck from Utah. But that was expensive, difficult and dangerous.

Because the railroad is powered by electricity, mil lions of gallons of diesel fuel have been saved over the years, making it one of the most economical and safe ways to move coal.

The mile-long coal train is pulled by four electric locomotives charged with 50,000 volts from an overhead line called a catenary.

As the train passes through Kaibeto Chapter, Moffett looks out the window and can see where she and her husband Wayne, a mechanic at NGS, have their home and where she grew up.

"Right here, that's where I was born," she said. "Our home area, our ranch area is right there, about a two-mile radius from where that mesa sticks out like that, all the way to that cone rock. That's where we live."

Moffett says she's fortunate she and her husband have been able to have careers on the Navajo Nation, and stay close to home and family. Without her job, she says, things would be different for her and many of the 450 Navajos she works with at NGS.

"I think my parents would have had a hard time when they got into their old age," she said. "My girls wouldn't have had their education. I'm pretty fortunate to be working where I'm at, and close to home so I can go back and forth."

Over the years, Moffett has seen it all from the operator's chair, from dozens of sheep or cows on the rails, to fog or snow that cuts visibility to zero, to a man asleep on the tracks. Thirteen cars went over him before she could stop the train, but he walked away without a scratch.

Her most unforgettable experience, she said, was when an air hose was mysteriously disconnected, turning the fully loaded coal train into a runaway without any brakes.

After loading the train and starting on the return trip, she and Operator Mike Etcitty gave each other puzzled looks when they felt something wrong, and then realized with disbelief what it was.

At 66 mile, the smoke of the locomotive filled the cab and they could see little red flares flying off the train as the motor started to burn up.

"These poles were going by like picket fences, they were just going by really fast," Moffett said. "We were doing like 110 when we hit that hill right there."

The only thing that stopped the train was a long, steep uphill grade as it approached the biggest curve on the line near Cowsprings Lake. Without that hill to stop it, it is believed the train would have wrecked.

Moffett said she and Etcitty were able to jump off when the train slowed, and they counted it rolling down and back up the hill 13 times before it came to a complete stop.

Despite this singular event, the BMLP Railroad has an excellent safety record. The entire power plant has gone more than 700 days without losing time to an accident.

Judy Moffett says she's grateful for the specialized and unusual job she has, but mostly because it has allowed her to fulfill her dreams for herself and for her family.