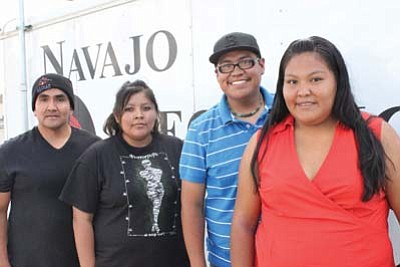 To help reach the broad student body, many candidates, including Cooley, turned to NTC's increasingly popular Facebook page to communicate with students from the school's two sites. Navajo Tech recently received a 26 percent increase in enrollment from the previous year after obtaining 1,174 students for the fall semester.

"I think Facebook is helpful in communicating with everybody," explained Cooley of Window Rock, Ariz. " I used it to do a lot of things for the NTC Parade Committee, and people really communicated through it. You walk into our STEM lab or the library and it's everywhere. It's a good way to get a hold of both students and faculty."

Navajo Technical College has seen a growth in enrollment in each of the last five years, and from its projected growth, the school is expecting to take the next steps to becoming a university in order to provide the supply to the Navajo Nation's increasing educational demand.

According to NTC Student Senate advisor Richelle Henderson, the expected increase in enrollment will only increase the importance of Cooley's position, as well as NTC's Student Senate.

"With more growth, there are going to be more issues, so we need a student government to be the voice for the student body," explained NTC Student Senate advisor, Richelle Henderson. "Improvements can be made and direction can be given to improve the needs of the students."

In addition to serving as the voice of the student body, the NTC Student Senate president also has a voting seat in Navajo Tech board meetings, where Cooley expects to become involved in some of the school's larger goals.

"I'd really like to get Student Senate involved in getting funding for our new gym or finding means to bring in more students. We need to get more students involved to pull in more people," explained Cooley. "I want to be a part of the change that is going to happen when Navajo Tech becoming a university because it's exciting."