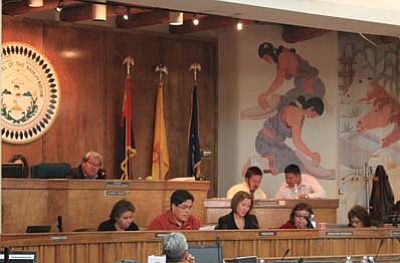 WINDOW ROCK, Ariz. - Navajo Division of Health acting director Roselyn Begay, sent a congratulatory message to the team who worked diligently to revise an outdated piece of legislation and to bring more attention and better services to Navajo People living with HIV/AIDS. New Legislation was passed yesterday, October 19th, by the Navajo Nation 22nd Council in the Fall Session 2011.

"On behalf of the NDOH, I would like to personally thank and congratulate you and members of the 2009 Navajo Nation HIV/AIDS Policy Development Work Group for the passage of Legislation No. 0283-11-2011 Navajo Nation HIV/AIDS Act by amending 12 N.N.C. §3201 Et Seq. She profoundly agrees with the testimony of Navajo Health Education Program Manager, Philene Hererra, that the law will help address health disparities, serve as a model for tribal public health policy for other American Indians/Alaska Natives, set standards for quality direct health care and public health activities, and assure protection for the vulnerable population-Navajo individuals who are living with or, are affected by HIV/AIDS," said Begay.

Herrera acknowledged Begay for being the first director who provided leadership and whole hearted support, from the early stages of the process, leading to this historical document. Herrera also extends appreciation to the 22nd Navajo Nation Council and sponsor of the legislation Delegate Joshua Lavar Butler, former council delegate Alice W. Benally, NDOH staff and many advocates who took time to submit support for the code during the five day comment period.

According to Butler, in the United States, American Indians/Alaska Natives rank third in the highest rate of new HIV infections as compared to all other races and ethnicities. Currently, there are only five Navajo health educators who provide exclusive HIV/AIDS prevention activities across the sprawling reservation serving more than 300,000 Navajos.

Butler emphasized the need to raise awareness about HIV and encouraged continued initiatives that help make HIV testing and education a routine of health services.

"We need the amendments passed, so our health educators can make sure the Navajo Nation is doing everything within their authority to keep infection rates low. Additionally, as a Nation, as a Council, as the governing body of the Navajo Nation, we have an obligation to provide more services. This means better prevention, better education in schools, in communities, more HIV screenings, so our people know their status. And to also provide additional services for those who are HIV positive or are suffering from later stages of the disease. The nation needs to provide counseling and compassion so that their rights are not trampled through misinformation, fear, and discrimination. The social stigma for those battling HIV/AIDS remains high and the code clearly states that no services will be denied to those afflicted and that refusing to employ someone with or suspected to have the virus is prohibited," Butler said.

The legislation is a result of teamwork. In 2009, the program collaborated with the Indian Health

Service, the U.S. Centers for Disease Control and Prevention, the New Mexico Department of

Health and the Navajo AIDS Network to strengthen the outdated tribal code that required revisions.

Ms.Herrera adds that the next steps will be to regroup with the team, initiate strategies to address the Code, develop both a detailed Plan of Operation and Implementation Plan based on the Law, create guidelines, goals and objectives, forms, and formulate a monitoring and evaluation plan. Ms. Herrera said, "It is important to acknowledge President Obama's National HIV Strategyand ensure both strategies complement one another."