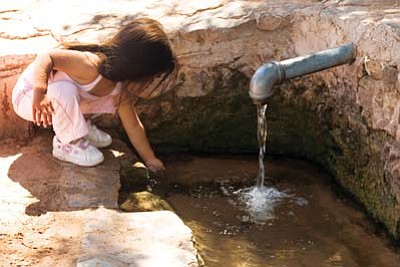 The suit seeks immediate groundwater restoration including the containment and treatment of the contamination that is migrating from the Tuba City Open Dump directly towards the Upper Moenkopi supply wells.

Hopi Tribal Chairman LeRoy N. Shingoitewa said the tribe has spent more than 12 years trying to get the BIA to adequately address the issue of groundwater contamination stemming from the open dump since the dump was shut down in 1997.

Since the mid-1990s, the Hopi Tribe has been working under the guidance of the Environmental Protection Agency (EPA) to establish a comprehensive program for the maintenance and protection of the tribe's drinking water sources on the reservation.

"We have a series of ordinances in place which conform to the federal Safe Drinking Water Act," said Shingoitewa.

"Simply put, the BIA has failed to comply with the requirements that are in place to protect the Hopi Tribe's drinking water," he stated.

The suit claims that during its operation of the Tuba City Open Dump, the BIA did little, if anything, to manage what was being disposed there and exacerbated the contamination by digging waste trenches that brought the waste material into close contact with the water table, which is approximately 15 feet below the surface. The BIA has failed to take any action to prevent the further migration of the contamination that is now within the cone of influence of the Moenkopi supply wells.

The BIA opened the Tuba City Open Dump in the 1950s and continued to accept waste until 1997. It spans 30 acres, 28 of which are on Hopi Tribal lands. The dump is within a wellhead protection area for the supply wells that service Upper Moenkopi.