Hopi High celebrates homecoming with a variety of festivities 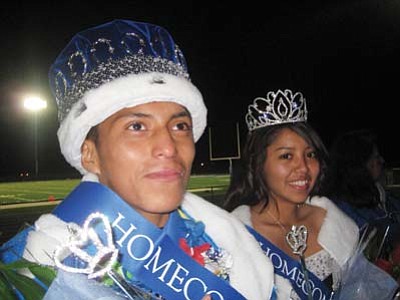 Huma said he was proud about getting the most votes for king. He said he accomplished something for himself and his school.

"I'll wear my crown on (football) game day," he said. "In the meantime, the crown is on a stand in my room."

Huma said he was surprised and scared when his name was announced as homecoming king.

"I was nervous in front of all those people," he said.

Huma said he thanks everyone who supported homecoming.

"I thank the school for making homecoming happen again this year," he said.

Huma, an honor roll student, runs for the cross country and track teams. He plans to major in agriculture at Central Arizona College.

The 18-year-old is the son of Sharon Grover and Marlin Huma. They live in Polacca.

Haskin also was surprised and shocked that she became queen. She faced four other contestants and she thought one of them was going to win.

She is keeping the crown in her room, but she doesn't know when she will wear it.

"I thank the voters who supported me," she said. "I thank everybody who helped me with posters, my float and with candy."

Haskin said her parents were proud and told her, "I told you so."

Haskin is active in National Honor Society and American Science and Engineering Society. She has an A average. She runs track and plans to go out for cheerleading. She plans to major in pre-med at Northern Arizona University.

The 16-year-old senior resides in Whippoorwill with her parents Perfenia and Ricky Haskin. The eighth graders and seniors won the hallway decorating contest. The freshman took second and the seventh grade and special education tied for third. The juniors took fourth and the sophomores placed fifth.