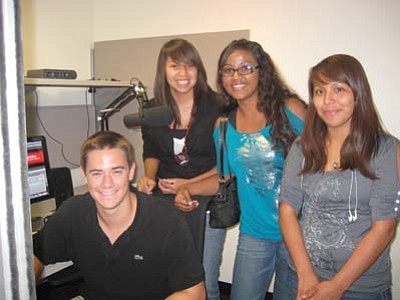 Christina Rucker took home two radio awards with a superior for public service announcement and an honorable mention for a commercial. Superior is the top ranking and could be considered the state championship in that division. Honorable mention is the third place for each category.

The top ranking in the public service announcement came for an announcement about a gas line break in the community. The commercial was about Cellular One.

Rucker, a junior, said the award was unexpected.

"I feel very happy, surprised and felt like I accomplished something big," she said. "I did not expect to receive any awards let alone two awards and one that is the highest you can get."

Puhuhefvaya was ecstatic about winning a state award.

"Winning was a shock. It made my day. I was walking around with a smile all day," she said. "Winning this award was awesome."

Puhuhefvaya, a junior, received her award for a sports story about the Hopi High boys cross country team.

Kagenveama, a senior, won her award for a profile on flute player Jose Fred. She said recording the profile was one of the toughest projects she had, especially because she had to correct her mistakes.

"I was glad I got my recording to perfection," she said. "I really didn't expect to win an award, but I was like 'hey.' It's worth a challenge so I tried it. I was glad to know that my hard work paid off for something good."

Lomayaktewa, a junior, won honorable mention for writing a story about Hopi High student Darin Johnson being named to the Public Radio Exchange Editorial Board. She did not expect to win an award.

"I felt very honored that I got a state award," she said.

Namoki, a senior, won an honorable mention award for her newspaper story about Youvella's nomination to the Arizona Interscholastic Association Executive Board.

She said she was also surprised she won an AIPA award this year.

"I felt happy and honored. This is the second year I won an AIPA award. My mom and my family are proud of me," she said.

The Hopi High radio students gave a presentation the following week at the Southwestern Institute for Education for Native Americans after being recognized by that group as a model education program.

The Hopi High radio students were the only student group giving a presentation as the rest of the presenters were adults including spokesmen for the Arizona Cardinals and Cable One.

The Hopi High radio student presenters were Sacheen Mike, Rucker and Puhuhefvaya with help from national journalism award winning student Mary Grace Pewewardy. The trio said the conference was educational and fun. They also thought their presentation went well although they ran into some technical difficulties and wished that the audience asked more questions.

They liked the sessions by the other presenters. Puhuhefvaya said she particularly liked the "I am sacred, not scared" session led by Hopi Percy Ami which focused on character and students making good decisions.

Mike, a junior, said Means was awesome with his standup comedy.

The trio said the tour at ASU Cronkite School of Journalism, one of the top journalism schools in the country, was fun and educational.

The trio were glad to reach a partnership with Radio Phoenix, an online radio station, and look forward to supplying them with news on a weekly basis. The Hopi High media students met with Victor Aronow from the Arizona Community Media Foundation to setup the partnership.

The Hopi High School radio broadcast and journalism clubs are raising money so they can attend the National Journalism Education Association conference in Seattle,Washington, April 12-15.

The radio club is attempting to raise $14,400 so they can send ten students and two chaperones to attend the national conference so students can learn more about how they can become empowered though communications.

The trip will cost approximately $1,200 per person for the airfare, hotel, food and other amenities. Hopi High School will match the money that the club raises. Any donation is appreciated.

The students attending the national youth radio conference will benefit by meeting students from other radio stations from throughout the country and learning more about radio techniques.