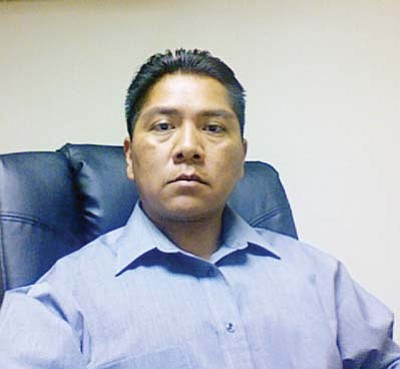 Youvella, who has been at Hopi Jr/Sr High for 15 years, will represent the 2A Conference on the AIA Executive Board. He is the first Native American to serve on the board under the tenure of AIA Executive Director Harold Slemmer.

Youvella said he is excited and anxious to work more closely with the AIA. He is one of nine members on the board that represents the entire state. He emphasized that he will voice concerns of the rural and reservation schools as well as the metro schools.

Keith Van Winkel from Heber is the only other member from a rural school.

"As the first Hopi to serve on the board, this is an honor and a challenge," Youvella said.

Youvella said Hopi High School has always been looked at as a leader with excellent coaches and cross country and basketball teams that have won state titles.

"This adds to Hopi High School's resume," he said. "I hope to bring a rural and reservation perspective to the AIA about scheduling and tournaments as well as recognition for the reservation schools that they deserve."

The AIA board meets once a month on the third Monday, usually at the AIA office in Phoenix. The board positions are voluntary.

Youvella said his appointment has received overwhelming support from the coaches, administration and community from Hopi High School as well as from other schools.

Youvella said the Hopi Jr/Sr High School fans can help keep the school in good standing with the AIA by their continued good sportsmanship. He said some schools have received reprimands because of disagreements that fans have had with officials.

"So far we've been good, but not all schools have," he said.

Youvella said good sportsmanship continues to give the school a positive image.

Youvella's appointment is for three years.

"I thank all the people who have been supportive," he said.

Youvella, who has been athletic director at Hopi High for five years, currently serves as the 2A North Chair. He is also a member of the AIA Cross Country Sports Advisory Committee. He previously coached girls and boys basketball at the junior high and high school.

"Wallace brings a wealth of knowledge to the AIA Executive Board," Slemmer said in a news release. "His perspective on athletics and activities will certainly strengthen the board's ability to make wise decisions during his term."

AIA Executive Board President Derek Fahleson said in a news release that Youvella will be a strong representative for the 2A conference schools as well as the overall membership.

"His insight and knowledge of small school issues, both rural and private, will be valuable to all members of the AIA executive board. We look forward to working with Wallace," he said.