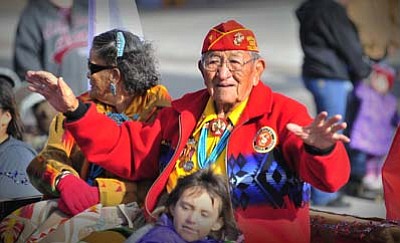 Todd Roth/NHO<br> One of the few remaining Navajo Code Talkers honors people at the parade with his appearance.

WINSLOW, Ariz. -The 65th annual Christmas parade was a resounding success. With 61 entries it was a typically comprehensive northeastern Arizona event. The parade was held on Nov. 19. Routing was on Third and Second streets through downtown Winslow. All along the parade route were vendors selling food, jewelry, Indian Art, Pinion and more. Vendor business was brisk, which bodes well for next year's parade.

There were four winners garnering the most points.

There were nine "Category" winners as well.