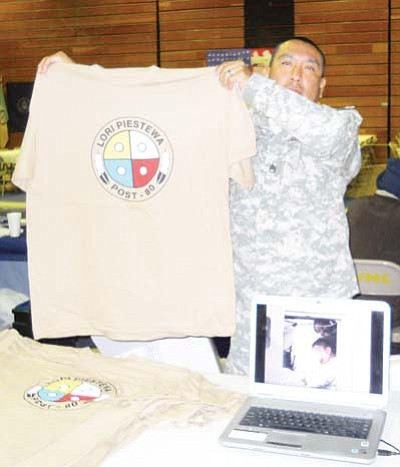 Rosanda Suetopka Thayer/NHO<br> Staff Sgt. LeRoy Outah, Arizona National Guard and member of the newly “renamed” Lori Piestewa Post No. 80, holds up a new shirt being sold and featured by the Hopi Veterans Post. The shirts are available for purchase either by phone or email. Pfc. Lori Piestewa was an enrolled member of the Hopi Tribe who became a national Native military icon in March 2003 when she was killed by Iraqi enemy fire in Nasiriyah along with several members of her 507th Maintenance Company.

HOPI RESERVATION, Ariz. - On March 23, 2003, Pfc. Lori Ann Piestewa gave her last measure of devotion to her country and people by making the ultimate sacrifice with her own life defending the United States. Piestewa was serving along with the 507th Ordinance Maintenance Company. She was killed when the company made a small but fatal error by taking a wrong turn near Nasiriyah, resulting in gun and mortar fire and rocket propelled grenades hitting her water hauling Humvee. The 507th was a small support company of clerks, repairmen and cooks.

Piestewa, whose Hopi name was "Kocho-Hon-Mana" (White Bear Girl), was only 23-years-old at the time, a single mother of two small children ages 4- and 3-years-old. She was raised in Tuba City on the western Navajo Reservation.

Piestewa is also the daughter of a Vietnam veteran and granddaughter of a World War II veteran, so honored service to her community and people was a family tradition.

Since her death in 2003, countless magazine stories, major national and tribal newspaper stories, even a made for TV two-hour movie, were created to document the life and sacrifice of Piestewa, who quickly became a world recognized war heroine from a small Native American community high in the Hopi and Navajo desert country of northern Arizona.

Piestewa's story almost wrote itself. She was a strong willed, Catholic-faithed daughter from a large Hispanic and Hopi family who was loved by her home community of Tuba City and Moencopi villages. She was also a young mother who had to provide for her small children who were being cared for by her parents while she served. Piestewa hoped that her training in the military during the war would help her learn new skills that could find her gainful employment when she returned home.

Sadly, she was first listed as Missing in Action (MIA) for several weeks. Later, she was determined to be Killed in Action (KIA) when several bodies of her company turned up in a mass grave behind a hospital in Iraq.

After international news broke that the missing 507th Maintenance Company members' bodies had been identified, including Piestewa, news crews and reporters turned up in droves in the small reservation town of Tuba City hoping to "scoop" a story about her and her background.

A special memorial held in her former high school alma mater, Tuba City High Warrior Pavilion, drew over 5,000 people, including military personnel from around the world as well as family, clan relatives, members of her Catholic church and her military comrades including Jessica Lynch who survived the Nasiriyah attack. Lynch wrote a book titled "I am a Soldier, Too" about her deep friendship with Piestewa.

But being raised Hopi, there was always the lingering tribal ideal to "remain humble" and to not seek outside celebrity by her family or long time friends. This added to the mystery and attention that the national media bestowed upon her, her surviving children and her family.

It has been this dedication to humility, honor and duty to one's family, tribal community and nation that made Piestewa a heroine to not just numerous tribal and ethnic communities, but also to a national American media market.

Hopi Post No. 80, which has been in existence since the late '70s, started off with a small group of Hopis who just wanted to get together, help establish some health benefit services and also to get together with other Hopi veterans and their families twice a month for potluck suppers to provide support, comradery and healthy family activity.

This low profile existence for Post No. 80 changed when Piestewa was killed. Hopi Post No. 80 was also thrust into the media spotlight since Hopi Post 80 was the only formally sanctioned veterans' organization on Piestewa's home reservation.

Now that same post, will continue to honor Piestewa as well as all Native and non-Native veterans who have sacrificed their lives in service to their people by using their new name of "Lori Piestewa Post No. 80" since the formal recognition issued by the National Headquarters of the American Legion was approved on Nov. 10, 2011.

With formal approval of the Terry and Priscilla Piestewa, Lori's surviving parents, former Hopi Post No. 80 made a formal request to the Arizona National Headquarters when the Piestewas called Eugene Talas, Hopi Veterans Director, to let him know that another tribe in Southern Arizona had requested to change their tribal post name to Lori Piestewa. Since Piestewa was an enrolled member of the Hopi Tribe, the Piestewas wanted to offer that name use to their own tribal veterans post first.

Hopi Post No. 80 was deeply honored to accept the Lori Piestewa name usage. Lori Piestewa Post No. 80 has since issued camo-tan colored teeshirts with the four traditional Hopi colors and two eagle feathers adoring the round new post symbol for sale.

T-shirts are priced at $10 for sizes small to extra-large with extra-extra large priced at $12. These T-shirts, can be purchased by calling the Hopi Veterans Services at (928) 737-1834 or by sending an email request to: hopivets@yahoo.com. There is an additional charge for shipping.