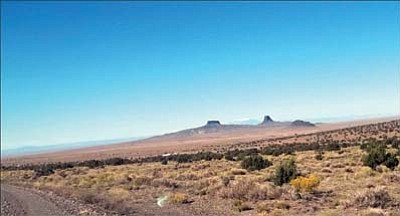 Submitted photo<br> Delcon, Ariz.: In the Navajo Nation, water is so scarce that some 40 percent of the tribe’s 190,000 residents have no potable supply, and many receive their water out of the back of trucks

NAVAJO NATION, Ariz. - The Navajo Nation - which spans a 70,000-square-kilometer (27,000-square-mile) stretch of mesa, sand, and canyons in parts of New Mexico, Utah, and northern Arizona - is the largest and, arguably, the driest American Indian reservation in the United States. Though the Colorado River serves as the reservation's western border and the Little Colorado River runs almost directly through its center, water is so scarce and inaccessible that some 40 percent of the tribe's 190,000 residents have no potable supply, and many receive their water out of the back of trucks.

Now, with the help of veteran Arizona Sen. Jon Kyl, a Republican and one of Capitol Hill's senior experts on water law, Navajo leaders and their lawyers appear to be steadily inching closer to a long-awaited legal settlement to draw millions of gallons of water for the reservation from the Little Colorado River.

The settlement would be the 27th Indian water-rights agreement to reach completion since the federal government began negotiating water rights with tribes in the 1970s, during the Carter administration. Like the others, the Little Colorado River agreement has followed years of intense mediation and legal negotiation by this western tribe, other water users, and the U.S. Department of the Interior.

While all parties are reporting steady progress, the final agreement, which requires Congressional passage, is not assured, largely because of an approaching and crucial political deadline. Earlier this year Kyl, who has helped guide several Indian water-rights settlements through Congress, announced that he will not run for a fourth Senate term in 2012. Thus, Navajo leaders and their attorneys are racing to submit the Little Colorado agreement to Congress by early next year, so that Kyl has sufficient time to make the case to his colleagues before he leaves office in January 2013.

Through aides in his office in Washington, D.C., Kyl declined to be interviewed for this article. He has made it clear in earlier public statements, however, that he is intent on reaching this goal of a final agreement before he retires.

The Little Colorado River settlement seeks to resolve the Navajo Nation's water rights under an evolving school of water law that starts with the federal "reserved rights" doctrine. This legal principle was first described in a 1908 U.S. Supreme Court decision for Winters v. U.S., involving water rights for the Fort Belknap Reservation in Montana. In deciding with the plaintiff, the high court held that Arizona Indian tribes have a right to the water that was available when the federal government had initially established the reservation and that reservations have a federally "reserved right" to sufficiently meet both current and future water needs.

More than half a century later, in the 1963 case of Arizona v. California, the Supreme Court determined that American Indian reservations are entitled to enough water to irrigate every acre on a reservation that is practicable for agriculture. In water law circles, this is known as the "practicably irrigable acreage" (PIA) standard.

Then, in 2001, the measurement standard was broadened by the Arizona Supreme Court, which concluded that agriculture is not the only means for determining the quantity of water that a tribe should receive, since water is also needed for other purposes on a reservation. The state court's decision was particularly applicable for the Navajo Nation, where large expanses of the reservation are not suitable for agriculture.

Both the Little Colorado River and the Colorado River settlement proposals represent years of legal negotiations, aimed at securing a long-term source of domestic water for the Navajo Reservation. For many residents, water is delivered not through a pipe and a faucet, but rather from a water tank in the back of a truck. The health costs that accompany this form of water delivery are high, say tribal officials, and often result in water-borne intestinal illnesses, caused by drinking contaminated water.

A 2006 water-pricing analysis by the tribe found that 3,800 liters (1,000 gallons) of hauled water carried a price tag of $US 133, compared to $US 2.73 for the same quantity of water that was delivered directly to homes via water infrastructure in nearby Flagstaff, Arizona. The high price of water is a contributing factor to the reservation's high poverty rate - more than 40 percent - which is among the highest in the country.

The annual municipal water consumption on the Navajo Reservation is approximately 15 million cubic meters (3.9 billion gallons, or 12,000 acre-feet), according to tribal figures. How much water individuals use depends on whether or not they are tapped into one of the reservation's municipal water supplies, so daily per capita water use ranges between 38 to 380 liters (10 to 100 gallons). By comparison, the average per capita use for 80 neighboring non-Indian communities in the western United States is 720 liters (190 gallons) per day.

Tribal officials anticipate the reservation's population to double by mid-century. Likewise, they also anticipate that per capita water demand could increase to 605 liters (160 gallons) per day. If that occurs, the Navajo Reservation's annual water demand will experience a seven-fold increase to 110 million cubic meters (29 billion gallons, or 89,000 acre-feet) by 2040.

More Water From the Little Colorado

The Little Colorado settlement would provide the Navajo with access to all of the water in the river that has not previously been appropriated for other uses, particularly for agriculture. The Little Colorado - which starts in the mountains of northeastern Arizona and flows northwest for 505 kilometers (315 miles) until it reaches the Colorado River - has an annual flow of 200 to 245 million cubic meters (52 billion to 65 billion gallons, or 162,000 to 198,000 acre-feet), according to the Arizona Department of Water Resources.

Though the precise level of unappropriated water in the Little Colorado has not been determined, the settlement may provide the Navajo with thousands of acre-feet of water annually, according to several estimates.

The settlement also calls for approximately $US 200 million in federal funding for new wells, pumps, and pipes to produce and transport water from two groundwater projects that would increase the domestic water infrastructure for the southwestern part of the reservation.

Much of the reservation, though, is also in need of a long-term solution to assure an adequate supply of water. In November 2010, the Navajo Nation Council, the tribe's top policy-making panel, approved a water-rights agreement that would provide the tribe with 38 million cubic meters (10 billion gallons, or 31,000 acre-feet) of water from the Colorado River.

In March, however, Senator Kyl alerted the tribe that, because the agreement required a $US 500 million federally financed pipeline to transport the water from the river to tribal homes and businesses, it would not gain sufficient support in a Congress that is determined to cut federal spending.

"It's always a challenge, but being able to build on prior settlements is helpful," said Stanley Pollack, a tribal attorney, who is assured that the Little Colorado River settlement can be completed before Senator Kyl retires in 2013.

Pollack was instrumental in getting the Navajo San Juan River Basin Water Rights Settlement through Congress in 2009, which resolved the Navajo's claims to another major tributary of the Colorado River, the San Juan River. The settlement included a $US 1 billion project, currently under construction, that will deliver water from the San Juan River through 420 kilometers (260 miles) of pipes and 24 pumping plants to the Navajo Nation and non-Indian residents around Gallup, New Mexico, and Window Rock, Arizona.