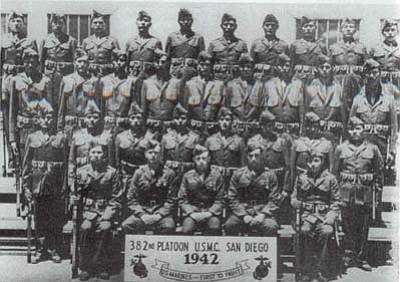 Submitted photo<br> The original 29 Code Talkers pose for a photo in 1942. These 29 men were sent by train to boot camp at Fort Elliot in California where they became the 382nd Platoon, USMC.

NEW YORK, N.Y. -Navajo Nation President Ben Shelly honored the Navajo Code Talkers at a reception and silent auction hosted by HBO at their corporate headquarters on Nov. 10 in Manhattan.

"To preserve this incredible story, we are now in the process of building the National Navajo Code Talkers Museum and Veterans Center. It will be a highly visible and attractive museum, educational and community center," said President Shelly in his remarks.

"Vice President Rex Lee Jim, and First Lady Mrs. Martha Shelly join me in giving tribute to the brave men and women of the Navajo Nation who have endured the ultimate sacrifice," said President Shelly in a statement released today honoring Veterans Day.

"We honor those who have fallen. May their names always be said with honor, and serve as a symbol of sacrifice and life. Our spirits are raised higher and our sight remains set on the horizon of today's freedom and tomorrow's prosperity," he said.

For those interested in making the museum a reality visit www.navajocodetalkers.org