Out and About: A look at the Bismarck Trail 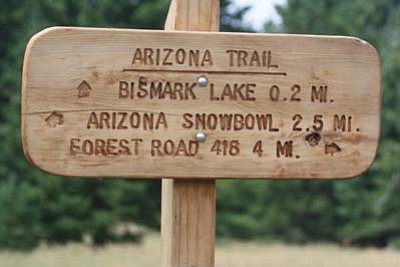 Stan Bindell/NHO<br> A sign at the beginning of the trial shows hikers their options, and what they are in for. Either way hikers are on the Arizona Trail

FLAGSTAFF, ARIZ.-Bismarck Lake is a great trail, but nothing hikers would expect based on its name. The lake is little more than a puddle. A horse could run through it in three strokes.

Here's seven reasons why Bismarck Lake Trail is great. First, it's up at 8,550 feet so during the summer it offers a great respite from the heat. The recent surge to above normal temperatures gives hikers a few last chances to hike it before it gets extremely cold again. Once the snow hits, this is probably not where most humans want to be unless they are on skis.

Second, the trail is only two miles roundtrip and only rises about 250 feet so it's kid friendly. During the summer young kids with parents can be found enjoying nature.

Third, the trail connects into the Arizona Trail. To the right, or east, hikers can go 2.5 miles to Snowbowl. To the left, or west, hikers can go four miles to Forest Rd. 216. Either way, hikers won't be let down because both sides offer marvelous stands of aspens when their not surrounded by pine, spruce and fir trees. Ferns are also bountiful.

Once hikers take off in either direction they are less likely to find kids or for that matter a lot of people, but some mountain bikers seem to like this portion of the Arizona Trail as well.

The fourth reason to like this trail is the wildlife. Coming within a quarter mile of the parking lot, a mule deer was in the pines. The mule deer didn't seem to care much that I was their to observe the beauty of it all. Another time, just as I entered the trail, a beautiful butterfly like I had not seen before, posed for me on a log.

That brings up the fifth reason, which is the summer flowers. Most of them are gone by now, but during the summer the flowers are abundant here with a rainbow of colors that entice many butterflies.

Sixth, the view of the western section of the San Francisco Peaks in the background is another reason this trail is worthwhile.

Seventh, about a half mile in, hikers come to a beautiful meadow.

The road to the trailhead is accessible by all vehicles, but much of the forest service road is good gravel. There are no restroom facilities at the parking lot. The parking lot also lacks any containers for trash, so if you pack it in, then pack it out.

The trail is an old jeep road that is now blocked off from vehicles. Deer and elk are abundant in this area.

Directions: From Flagstaff City Hall, go north on Humphreys Street for .06 mile. Turn left onto Highway 180, which also goes to the Grand Canyon. At 9.8 miles, turn right onto Forest Road 151, known as the Lower Hart Prairie Road. Drive about six miles, then turn right on Forest Road 627 and drive to the fenced parking lot where the road ends.

Out and about: hiking the Arizona Trail from Jacob Lake
Out and about: eagles soar and wildflowers bloom around Woods Canyon Lake
A river runs through it - Mount Baldy
Out and about: Flagstaff’s Weatherford Trail offers views topping off at 12,633 feet
Out and about: Green as far as the eye can see along the Barbershop Trail