Hopi veterans honored with parade on their special day 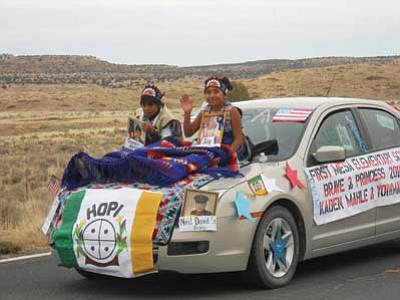 HOPI RESERVATION, Ariz. - What started in November 1919 by then President Woodrow Wilson who proclaimed an official "Armistice Day" to commend and honor the heroism of those who had died in battle and served in their countries' service, this holiday was officially recognized by the United States Congress after World War I was officially considered over.

"Armistice Day" was then made into a formal legal holiday in 1938 and was changed from "Armistice Day" to "Veteran's Day" in 1954 with the idea that creating this holiday would honor the men and women who exhibited patriotism, love of country and the willingness to serve and sacrifice for the common good.

This holiday is especially important in all Native communities because Natives are the first, true Americans and they are honor bound by their tribal traditions, history, family and culture to defend and protect their natural, original homelands. This commitment to family and battle service continues to this day.

Even though the air was brisk, very chilly and skies were covered over with grey misted clouds, this did not deter the Hopi community from coming out and showing their local Hopi and Tewa veterans their love and appreciation by hosting a community parade, a hot lunch, with veterans service vendors and special presentations by varied organizations on the Hopi Reservation for all veterans and their families to enjoy on Nov. 11.

Hopi Veterans Affair Director Geno Talas was joined by Hopi and Tewa retired military in hosting a full agenda with posting of colors by Hopi High School JROTC Color Guard, the National Anthem sung by reigning Miss Hopi 2011-2012 April Pavinyama, a special Flag Honor Song by the BearShield Singers, a Tewa honor song by Randall Mahle, musical performance by Sun Fire Band and a photo-video montage by Kassondra Yaiva, with Master of Ceremony duties shared by Bruce Talawyma and Randall Mahle with a brief message from Leroy Shingoitewa, Chairman of the Hopi Tribe.

Opening prayer was given by Phillip Quochytewa, U.S. Marine Corps veteran, with a special presentation given to the families of Orville Wadsworth and Rex Pooyouma families. Both Wadsworth and Pooyouma were the last living Hopi Codetalkers, utilizing their Hopi language to help win the war for the United States and have been recognized and honored this past year by the entire Hopi Tribe for their military contribution.

There were two very special moments at the Hopi celebration, one to honor the "Missing/Killed in Action" personnel and one to honor the current active military members of Hopi and Tewa descent.

A very special T-shirt booth was also highlighted at the Hopi Reservation event, which premiered a new name for the local Hopi Post No. 80, which is now formally known as "Lori Piestewa Hopi Post No. 80," to honor the late Lori Ann Piestewa.

Piestewa was a young Hispanic-Hopi woman soldier from Tuba City who died in March 2003 under ambush fire. Piestewa was a single mother of two small children and noted as being the first Native American woman soldier to die in active battle in the current war conflict. Piestewa has been celebrated by national and local media events since 2003, including renaming a mountain located near Phoenix, Arizona to honor her and all Native American veterans service. The formerly called "Squaw Peak" is now called "Piestewa Peak." Piestewa's parents, Terry and Priscilla Piestewa were also featured in a television special and given a new home in Flagstaff to help raise Piestewa's two small children who were left behind, through the ABC show, "Extreme HomeMakeOver."

Camo-tan colored T-shirts with the new Hopi legion post name of "Lori Piestewa" were selling fast and can be purchased by contacting Eugene Talas, USAF Retired, Commander of Legion Post No. 80 or from Anthony Honahnie, USA Vice Commander by calling (928) 737-1834 or by emailing hopivets@yahoo.com or by writing to : American Legion Post No. 80, P.O. 466, Kykotsmovi, AZ 86039.

They are $10 for small to x-large sizes and for XXL size, $12 dollars plus shipping.

Current active duty military members were recognized. They include -