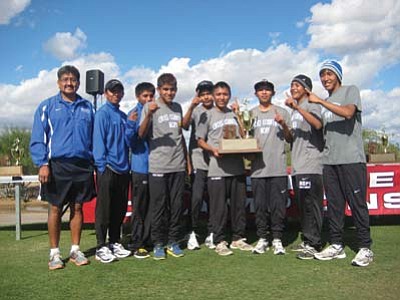 Nico Montanez from St. Augustine Catholic was the individual state champ with a time of 16:16:97 in the 153 runner race. Josh Hoskinson from Arizona Lutheran placed second.

Rick "The Legend" Baker, coach for the Hopi High boys team, said the state championship victory was good for the runners, the program and the school.

Coach Baker said the record number of state titles is a credit to the runners who were in the program in the past.

"I'm glad to have the record for now," he said.

Baker said the boys team was not as strong this year as some past years.

"So we had to coach the the kids on how to run," he said. "We had to use more strategy. We let the kids know who they had to beat and where they had to place in order to win."

Some of the Hopi fans had to drive through snow the previous night to get through Flagstaff and it rained in Phoenix the previous night. The rain caused a new drainage at the track and forced officials to run all the races an hour later than scheduled.

Baker said the hour setback had the coaches panicking because they are so precise about what they do.

"But it had little impact because all the teams had to run an hour later," he said.

Baker said the weather also had the same impact on all the teams.

"We all had to run in the same weather. Everybody was glad it was cooler out because it made it perfect for cross country," he said.

Hopi High will lose four seniors to graduation, but three members of this year's team will comprise the nucleus for next year's squad.

"We have a good JV crew that will be stepping up so we should be strong. You can't count us out," he said. "It was great to get the championship again."

Baker said to prepare for next year that most of the runners will go out for track in the spring and like usual Hopi will have a summer running program.

Hopi High Principal Glenn Gilman said he believes that the boys' and girls' programs have achieved the ultimate success of winning state championships because of determination, perseverance and belief in their culture.

"Their belief that team effort is foremost in accomplishing their goals is why they achieved the greatest accomplishment of winning the state cross country championship," he said. "I congratulate both coaches and teams for their outstanding effort."

Domonic Sinquah, a senior, said he felt happy that this team didn't mess up the state championship streak. He said the Bruins ran to their potential and he ran a good race.

McCray Huma, a senior, said the Bruins ran to their potential and they ran a good race.

Hopi High girls won their fifth straight state championship with 39 points and Pusch Ridge Christian from Tucson was a distant second with 78 points. Northland Prep from Flagstaff took third with 83, Holbrook finished fourth with 145, Ganado grabbed fifth with 160, Sedona placed sixth with 195, Scottsdale Prep took seventh with 207 and Many Farms finished eighth with 215.

Sarah MacDonald from Pusch Ridge was the individual state champ with a time of 18:55:28 in the 121 runner race. Keven Griffen from Northland Prep placed second.

Coach Lomakema said she was surprised with the order that the girls finished, but they have been flip flopping leaders throughout the season.

"Claryn, Kaitlin, Randi and Charmayne have taken turns leading us," she said. "It's hard to determine who our top runner will be. It was whoever wanted to lead."

Coach Lomakema said the weather and time delay did not impact the Lady Bruins because they are "always ready." She said the cold weather was a benefit because that is what Hopi is used to running in.

"Winning the state championship doesn't get old," she said.

Hopi will lose three seniors to graduation, but four of the top five runners were sophomores.

"This was Charmayne's first year running and she did an outstanding job. Lucinda has been our vocal leader and Jasmine has been on the state champion team for all four of her high school years," she said. "We'll have a good nucleus for next year.

Josytewa, a sophomore, said she was so proud and happy that the Lady Bruins won another state title. She said this year was different because of new competition.

"We ran a very good race. We had a good feeling we could win, but Coach Lomakema didn't want us to get too cocky," she said.

Josytewa noted that there was a false start when a runner fell down. She said the key to winning was staying together in a pack and encouraging each other to stay close.

Ben, a sophomore, said she felt proud and accomplished by winning the state title. She said the Lady Bruins ran to their potential. She said she ran a good race for the first two miles.

Billy, a sophomore, said she felt "so, so happy that words can't explain how I felt." She emphasized that this year's team was much more competitive and that Hopi High ran an excellent race.

"The course was great, kind of challenging," she said. "The weather was cold,

but I didn't let that stop me and neither did the rest of the girls. We are tough rez chicks."

Billy said the race was somewhat competitive, but she knew the Lady Bruins would win. She said the key to winning was staying together as a pack.

Lomayestewa, a sophomore, said winning the state title was awesome.

"I was so happy that we achieved our goal and we took our fifth consecutive state title for the school. I cried," she said.

Lomayestewa said she ran a good race, but she could have done better if she didn't fall in the beginning. She said the weather was cold to start, but it warmed up so it was fine.

Humetewa, a senior, said she felt amazed and thankful that Hopi High won another state title "for my wonderful sisters and my family." She added that Hopi ran a perfect race.

"We accomplished our goals with no negative thoughts in the way," she said. "The weather felt like home, not too hot, but nice."