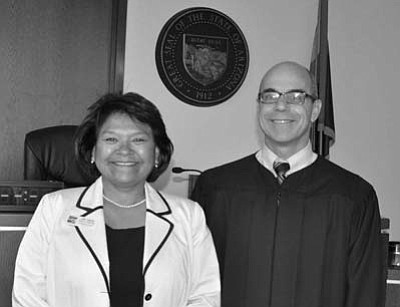 Submitted Photo<br> Chairwoman Lena Fowler stands next to Justice of the Peace Howard Grodman at the first hearing.

TUBA CITY, Ariz. - Navajo Nation residents with misdemeanor arrest warrants - many of whom haven't stepped foot off the reservation in years - had them cleared by a visiting Coconino County Flagstaff Justice Court judge, who held the first-ever court hearings on the Navajo Nation.

Until the historic Sept. 27 court hearings before Flagstaff Justice of the Peace Howard Grodman, several Navajo residents with outstanding warrants were reluctant to leave their homes to clear the warrants for fear of being arrested, said Coconino County Board of Supervisors Chairwoman Lena Fowler.

"It's very important that we provide this service to people who have been really shackled by the legal system," Chairwoman Fowler said. "The main question that came to our office, when people called, was whether they were going to get arrested. These are people who have decided they are not going to step over that boundary line."

The cases ranged from lacking proof of insurance, registration or a driver's license; to driving with expired vehicle registration, on a suspended license, revoked license, DUI, possession of marijuana, driving without child restraints and speeding.

Judge Grodman said the intention of holding court in Tuba City was to clear as many warrants as possible. He said people may have been avoiding the court or going to Flagstaff for fear of being taken to jail.

"I think it went well," Judge Grodman said. "I think there's some legitimate fears of being arrested coming into court. You have people with suspended driving privileges and they may be suspended because they haven't paid the fines and they'd be potentially be racking up more fines if they were driving."

Judge Grodman cleared 15 outstanding warrants for residents from Tuba City, Kayenta, Tonalea, Pinon and Kaibeto. One main goal was to reconnect those residents with the court system and to appoint them an attorney if needed.

Navajo Nation Tuba City Judicial District Court Administrator Alice Huskie was encouraged by the effort to bring the hearings. "My staff and I are very happy to have participated in the planning of this new initiative and we fully support Lena's efforts to assist the general public by bringing the county courts here to the Navajo Nation," Huskie said.

"The purpose of holding court in Tuba was to clear warrants so that people could start working again, go to school again, be able to go wherever they need to take care of daily activities. Those whose warrants were cleared can now feel free to continue with their lives," Chairwoman Fowler said.