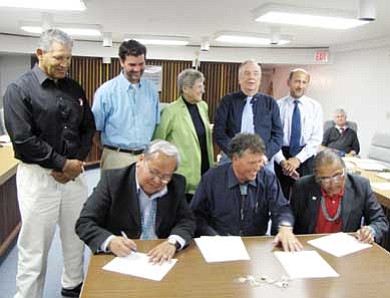 The 22nd Navajo Nation Speaker Johnny Naize, Cortez Mayor Dan Porter and Navajo Nation Human Rights Commission Chairperson Duane H. "Chili" Yazzie signed a memorandum of agreement (MOA) "to serve as a foundation to achieve a better race relation between the citizens of the city and Navajo Nation" at the Cortez City Hall after the city council meeting was called to order.

"The MOA allows the community and our office to address issues raised in the public hearings in February 2009 in a collaborative partnership to bring resolve to those issues," said Navajo Nation Human Rights Commission (NNHRC) Executive Director Leonard Gorman, who was at the signing.

The MOA initiative began as a recommendation made in the NNHRC 2009 report, "Assessing Race Relations between Navajos and non-Navajos: A Review of Border Town Race Relations."

According to the NNHRC report, "The development and establishment of MOAs are needed to ensure that Navajo citizens are not discriminated against." To read the report, www.nnhrc.navajo-nsn.gov.

NNHRC staff members who were present at the signing explained the receptive and open nature at the city council meeting. The signing was generously moved ahead in city council agenda after the call to order was made.

John Dulles, who was the Regional Director for the U.S. Civil Rights Commission (Denver) witnessed the historic signing with the Navajo Nation. Arthur Neskahi, who had provided testimony in February 2009 in Cortez, was also in attendance.

When Yazzie took the podium at the city council meeting, he explained the need for both governments' to address race related issues together. Honorable Naize and Mayor Porter addressed city council members, too.

Less than a year ago, NNHRC, an authorized entity for the Navajo Nation legislative branch to address race discrimination, sent a draft MOA to Cortez city officials. Since issuing the draft MOA, Cortez Chief of Police Roy Lane initiated a conversation about the MOA with NNHRC. Cortez city officials then addressed the MOA and later approved the MOA language in February 2011. Lane provided opening remarks at the signing.