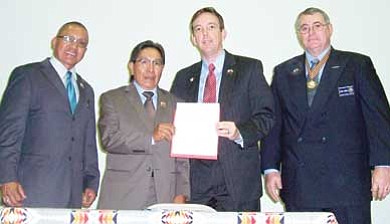 Rosanda Suetopka Thayer/NHO<br> A ceremony recognizing the contributions of the Hopi Code Talkers culminated with signing of SCR 1009. Participating were (l-r): Sen. Jack Jackson (D-Window Rock), Hopi Vice Chairman Herman Honanie, Arizona Secretary of State Ken Bennett and John Dudas, northern regional manager for Veterans Services Division of the Arizona Department of Veterans’ Services. The resolution, which passed unanimously, formally acknowledges and honors the 10 Hopi Code Talkers’ contributions to the United States and the state of Arizona. The resolution also encourages schools to teach about the contributions of the Hopi and other Native American code talkers.

KYKOTSMOVI, Ariz. - It was a momentous occasion, one that must go down in Hopi history books as a day of long awaited recognition for not just the 10 Hopi Code Talkers, but for all Hopi veterans who have served honorably, bravely and without hesitation in the service of this country, the original native homeland to all Native Americans who occupied, treasured and defended this land first before anyone else.

On May 23, all families of the 10 Hopi Code Talkers were publicly recognized by state and local dignitaries, tribal officials, honored Hopi veterans and members of the Hopi community in a ceremony held at the Hopi Veterans Memorial Center in Kykotsmovi.

Much recognition and appreciation was given to Sen. Jack Jackson Jr. (Democrat-Window Rock) of the Navajo Nation for sponsoring the original bill proposal titled SCR 1009 during the Annual Indian Nations and Tribal Legislation Day held at the state capital during the recently completed legislative session.

Sen. Jackson, the son of former retired Arizona Sen. Jack Jackson Sr., worked with Arizona Secretary of State Ken Bennett and members of the Arizona legislature, local Hopi Veterans office personnel at Hopi and members of the Hopi Post No. 80 cooperating with the State Senate Veterans and Military Affairs Committee to gain passage of the resolution. The resolution would finally recognize the major contribution of these 10 Hopi men who used their own tribal language to help defeat the Japanese during World War II. Other code talkers from other tribes in the Southwest have also been honorably recognized.

Clifford Qotsaquahu, U.S. Army veteran, Hopi tribal member and guest speaker at the ceremony, said, "This is an important day in Hopi history, because freedom is what so many other countries want and wish they had. I am so proud to be here today, proud to say I can exercise my right to freedom, to our Hopi ceremonies and to speak our Hopi language. Our fight for freedom ensured this for all Natives like our fellow tribes such as the Navajo, Sioux, Apache and all the way to Alaska for Eskimos. As Natives, we are the first defenders of this land, so this is day of celebration. Way back in 1990, a bunch of Hopi veterans marched on Hopi Tribal Council to ask for veteran support services, but funding wasn't given to us until 1992. Hopis seldom talk about their war services, but during the war, as Hopis, we maintained our own culture, even praying each day to keep us grounded until we could return home. I hope that everyone here can understand what these 10 men did in their duty to be front line defenders for our country. I support this special honor because it was done to protect and care for us all," said Qotsaquahu.

"My heart is very happy to be here today and to share with the Hopi people this moment in Hopi history. I want to thank all of the dignitaries who came today to acknowledge the importance of this day for Hopis and their contribution to the welfare of this country, like the Vice Chairman of the Hualapai Tribe and Mayor Sara Presler of Flagstaff, Jesse Thompson of the Navajo County Board and all the state representatives," said Sen. Jackson.

"My father, Jack Jackson Sr. along with your honored code talkers, were all quite young when they served," he continued. "I was honored to be able to meet with your Hopi veterans in early January and help pave the way to make this senate bill successful. Janet Regner was instrumental in helping get it approved. That day, I committed myself to make this honor for your Hopi Code Talkers a reality. This bill got full approval at the House level. I also want to acknowledge my father, Jack Jackson Sr., because through his legacy and office terms as an Arizona senator, he showed me most what our tribal language and cultures are all about and how extremely important it is to keep speaking our language and keeping our tribal traditions alive. That as Natives, this is one of the most important things we can do for our children and grandchildren. It is my honor and tribute to you as Hopis along with your families and community to be able to serve you as your state senator."

Sen. Jackson was presented two kachina doll carvings by Vice Chairman Herman Honanie and the Hopi Chairman's Office. He was also presented a special painting by renowned Hopi artist Anthony Honahnie, who also serves as the local post commander for Hopi Post No. 80, with special recognition and a gift given by Hopi Veterans Office Director Geno Talas.

Hopi Tribal Chairman LeRoy Shingoitewa was not at the event. The attending crowd was told that he was in Washington, D.C. to give formal testimony on the Peabody-Navajo Generating Station. A written congratulatory statement was read by a member of his staff.