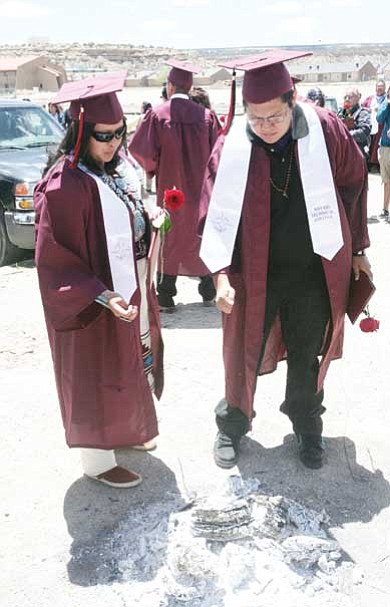 Submitted photo<br> Students bless themselves prior to graduating from Navajo Technical College.

CROWNPOINT, N.M. - Before President Ben Shelly, distinguished guests, family and friends, the largest graduating class in Navajo Technical College history stepped forward and received their certificates of graduation the weekend of May 21 in Crownpoint, NM. Over 200 students walked to receive their diplomas, which included 153 certificates, 36 degrees and 19 GEDs.

"I'm honored and happy to be here," President Shelly addressed the graduates. "It's a good day in the Navajo way. You're the next generation who is going to be taking over the Navajo Nation. Navajo Tech is a great school so be proud you are here. Navajo Technical College is going places."

The graduation capped off an eventful year for Navajo Technical College, which was on the cusp of losing a large amount of its funding earlier this year when Section 117 of the Carl D. Perkins was labeled an "earmark." But because of lobbying from some of the nation's most influential leaders and from local support, that earmark was removed and U.S. Congress restored NTC's funding with the approval of the 2011 budget.

While NTC's funding scare weighed heavily on the past year, it was NTC students who made it a memorable one. Twenty NTC students placed first in the SkillsUSA New Mexico state competition earlier this year and will now travel Kansas City, Mo. in late June to compete at the national level.

Earlier this month, team "CLOUD 9" of NTC traveled to Milwaukee, Wis. for the Third Annual First Nations Rocket Competition and placed second after launching a rocket almost 6,000 feet in the air.

At this year's 30th annual American Indian Higher Education Consortium (AIHEC) academic competition, NTC produced 18 medalists - six of which received first place. Among them was NTC archer Collins Woody, who after only two weeks of training captured the competition's top overall honor. In doing so, Woody also helped his team to a second place finish in just it's second year of existence.

The NTC men's and women's basketball teams also made a splash at the AIHEC championships by taking home first place titles, and NTC standout center Latydia Holiday was named the tournament's Most Valuable Player.

The NTC cross country team ran by the competition this past fall, and qualified for the first time for Nationals. The NTC rodeo team also had a relatively successful year in the Grand Canyon Mountain Region, and will have heeler Shane Jodie roping for a collegiate title in June at the College National Finals.

While the year saw much achievement from its students, Navajo Technical College's biggest recognition of achievement came when the Aspen Institute College Excellence Program listed NTC as one of the top 120 community colleges in the nation - the only one in New Mexico and on the Navajo Nation.

The honor was based off of data that evaluated the percentage of students who graduate with an associate's degree or successfully transfer from their community college into a four-year institution. Whereas the national retention rate is only 51 percent for all colleges and universities in the U.S., NTC has maintained over a 70 percent average retention the last several years.

With so much success stemming from Navajo Technical College and its students, the possibility of the future looks bright for many of its graduates.

"It's a great time to make our world better," encouraged commencement speaker Brigadier General Vaught. "Maybe you can be the one to change the world. It needs some change."