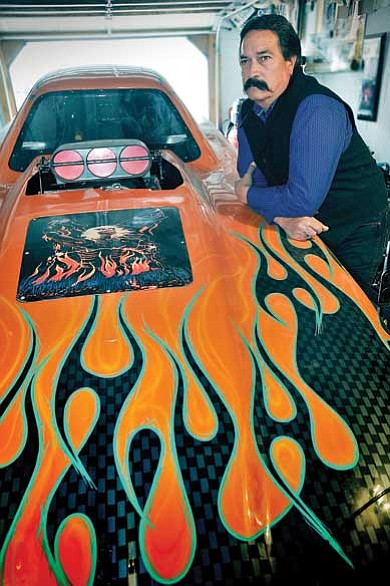 Todd Roth/NHO<br> Charles McLaws with his “Funny Car.” The car achieves 220 mile per hour in the quarter mile.

WINSLOW, Ariz. - He's been in Winslow since 1954, graduated from Winslow High School and has a boxcar of racing trophies. It's Charles McLaws of course. And his great-grandfather was an early settler of Joseph City in 1890. On his mother's side, his great grandfather, Jose Nuanez was a early settler in Holbrook and operated the "White Saloon," which looked like something right out of a western movie. It's no coincidence that there's a McLaws Road running from Joseph City to Holbrook. It's named after McLaws' great-grandfather.

McLaws has been involved in Little League Baseball continuously since 1972. Coaching all age groups: Majors 10-12-year-olds, Babe Ruth 13-15-year-olds and even The Big League 16-19-year-olds. Four of his Big League players won college scholarships in baseball. In 2001 McLaws promoted and directed the major lighting upgrade at Vargas Field, installing more lights and metal poles, which finally made night games safe for the players. The Vargas Field Lighting project involved 20 volunteers, APS volunteers, City Manager Roche and two APS crane trucks. The city of Winslow paid for the light fixtures but all other hardware and labor was donated.

Rotary Club of Winslow has also received 20 years of participation and support from McLaws. Countless projects of Winslow Rotary over the past 20 years have been made more successful because of McLaws' tireless community support.

"McLaws Motorsports" is a more modern take on the McLaws name, being the name of the sport that McLaws has dedicated many years too. In two words "drag-racing." McLaws has an indispensible partner in his Funny Car racing activities, his wife Liz. He told me that he would not be doing racing, if not for the help and participation of Liz. She is his racing partner, crew chief and totally indispensable.

McLaws began Winslow drag racing in 1967 with a 1955 Chevrolet Station Wagon, his first car. McLaws trained as a mechanic with his father Phil, who owned "Phil's Texaco Station" on Third Street. He also worked at Cake's Chevrolet and for the Railroad. The racing mentor for McLaws was Ron Miller, an Arizona racing legend who passed away last year. Through the years Charles has had more than a dozen racecars before finally specializing on the class called "Funny Cars". He and Liz used to race their Funny Car all over the western United States and won first place in their class at Seattle International Raceway in Seattle Washington. Briefly from 1983 to 1985, McLaws took some time off of the smokin' drag strips and raced Jet Skis, but the asphalt was calling and he returned to the Funny Car world.

McLaws is generating in his grandchildren the same enthusiasm for drag racing he has. They are racing the smaller dragsters for non-adults and winning a lot. McLaws treats all his grandchildren with great love and affection and they return it tenfold. I've seen it.

Charles McLaws - one of Winslow's great contributions to a neat place to live.