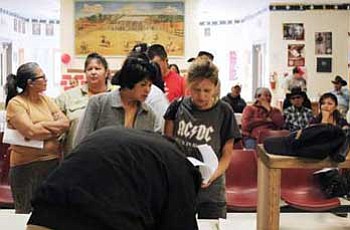 Photo/Rick Abasta<br /><br /><!-- 1upcrlf2 -->Angelita Bahe double checks her paperwork before signing for water utility services to be connected to her home in Round Rock. Bahe applied for water in 2003 and said she previously had to haul water from the community windmill. She is one of 81 residents that will receive running water after completing the three-hour homeowners training on May 4.

ROUND ROCK, Ariz. - Water is a precious commodity and nobody knows that fact more than Navajo families that haul water for every day living. For these families, water conservation is a way of life, not just words espoused in the spirit of ecology.

Arbin Mitchell, director of the Navajo Nation Division of Community Development (NNDCD), said funding waterline projects is a mainstay of the division, especially since it helps so many Navajo families.

"Promoting viable communities through Navajo values is the mission of the division," Mitchell said. "Water is life for Navajo people and nothing is more important than sustaining this natural resource."

On May 4, 81 homeowners in Round Rock gathered at the chapter house to learn maintenance of plumbing and septic systems. It was the final step in a lengthy process of receiving running water.

Round Rock Chapter President Kellywood Harvey Sr. said phase one of the waterline development was initiated in the 1960s, which started in the center of the Round Rock community and extended out over the decades.

"What we're concentrating on today is phase six and seven," Harvey said. "We will continue working on phase eight bathroom additions next."

Bathroom additions are a prerequisite in requests for waterline extensions.

Funding from NNDCD funnels down to the chapters, which in turn, construct the additions for homes before waterline development begins. It is the responsibility of the chapter to ensure homes have potable water.

Ali Ali, field engineer for IHS, covered care for plumbing, water meter, septic tank, and drain field. Ali worked for Many Farms IHS for over five years and worked on sanitation project NA-09-S09, which piped water to Round Rock southwest and southeast.

"It was two projects in Round Rock, one toward Rock Point, west of town and another going east, toward Lukachukai. It's been in development for five years now," Ali said.

The Q28 and N75 waterline development were part of the PL-86-121-ARRA project. PL-86-121, or the Indian Sanitations Facility Act, was enacted on July 31, 1959. It provides authority for providing essential water supplies and sewage facilities.

Joining Ali for the final inspection meeting was environmental health specialist Jacey McCurtain and engineering technician Perry Reed. McCurtain and Reed addressed the community in Navajo for the benefit of many Navajo elders in the audience.

The biggest concern for many families was the lengthy period of time required to for the waterline to be activated, Ali said. He described the process, which begins with funding from IHS headquarters in Rockville, Md.

"After the right-of-way package, we receive permission to construct from the Navajo Nation," Ali said.

The design-construction package is the next step, consisting of the waterline design and actual construction with backhoes and bulldozers. The final inspection package comes next, with coordination from local utility companies. Work by IHS and Navajo Engineering and Construction Authority is inspected to ensure all parts are working.

Next, homeowner training is conducted and water deposits are paid to the utility company. Finally, the waterline is turned on and Navajo families are able to enjoy the amenities of running water.

"All of these packages and signatures are required by law and that's why it takes so long," Ali said.

Regardless of the wait, one community member was ecstatic the waterline was finally going to be activated. Angelita Bahe said she applied for running water in 2003, when she moved back to Round Rock.

"It's going to make a huge difference because we actually have to go to the windmill to get water," Bahe said.

Her family of six utilizes a 600-gallon water tank that must be replenished twice a month, which entails an hour-long process of hauling water buckets from the windmill, six miles away.

Bahe's message to the government is simple: "We really need this water. Try to supply more people with water because there's still a great deal of people out on the reservation without running water."

Perry translated Ali's presentation to the audience about the one-year warranty period for the water system installed by IHS. He stressed that after one year all repairs would be the responsibility of the homeowner.

"Everything inside the house, everything from the house to the water meter, and everything in the septic tank, and the drain field is the responsibility of the homeowner," Ali said.

Residents were given a 13-page guide detailing how to care for plumbing, water connections and septic system. A list of contractors was included in the handout for repairs and septic cleaning service.

Reed took the residents outside the chapter house, where a septic tank, drain field and water meter system was set up for the demonstration.

He showed them how to turn the waterline off in case of emergencies and emphasized not to drive or park on the drain field. Construction atop that area was also discouraged.

Reed said residents are able to see if the septic tank needs to be cleaned by checking the red-colored septic tank access port. He warned against children stuffing trash or other items down the port to prevent clogging the system. The blue-colored ports represented fresh water access, he explained.

The biggest warning was not to connect washing machines to the septic system because that would result in immediate backup of the system, which only has a capacity of 1,000 gallons.

Rather, the grey water from the washing machine should be drained into a separate channel outside for evaporation, Reed said, because IHS wouldn't be liable for repairs in that instance.

McCray gave instruction on the septic tank and the microbes that breakdown the solids inside the tank.

"Don't use your toilet as a trash can," McCray said. "Don't poison your septic system. Poison or harsh household chemicals can kill the beneficial bacteria."

Septic tanks need to be checked every two years, McCray said, to determine when the system must be pumped. She said checking the sewage level with a six-foot pole or stick is ideal, especially when septic service is performed.

"When that contractor shows up, you need to make sure you're there to make sure they do their job correctly and not just take the water," Ali said.

Manual inspection to see if the solids are cleared from the tank is crucial, he said. Otherwise, the tank will fill up and need cleaning again right away.

Candelaria Manygoats, a life-long resident of the community, said, "It's important and great that some of our remote communities are getting water. Water is life and I hope they know how to conserve."

After waiting for over six years, Jaye Betonie said the new waterline would save wear and tear on his vehicles from hauling water.

"We have to conserve water and not waste. It has to serve everybody," Betonie said. "Don't shower 10 times a day."