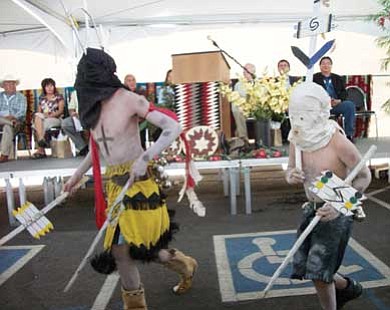 TUBA CITY, Ariz. -On May 7 the Tuba City Regional Health Care Center (TCRHCC) held its grand opening of the Outpatient Primary Care Center (OPCC). The afternoon was filled with gratitude and celebration for the many years of work that culminated with this day.

Franklin Fowler, TCRHCC Vice-President Board of Directors, was master of ceremonies. The festivities began with the presenting of the colors by the Tuba City Health Services Commissioned Corps Officers. Christy Johnson, Miss Greyhills First Runner up, sang the national anthem in Navajo in honor of the flag.

Davis Filfred, a medicine man from Utah and former Navajo Health and Social Services Committee member, sang a traditional blessing song in Navajo. After the song Fowler stated, "I was moved by the song and decided to introduce myself in Navajo. I am grateful for the good weather." He went on to introduce "the famous Grey Farrell" to make a welcoming statement.

Grey Farrell Jr., TCRHCC Board of Directors President, wanted to recognize the past board members that were in attendance who helped start the vision of the OPCC, which finally came to reality after many years.

Joshua Butler, council member from Tuba City area, recognized the dignitaries in attendance. Many dignitaries confirmed were unable to attend however he recognized individuals from M&I Bank, TCRHCC Attorney Gehl Tucker, past board members, Navajo council members as well as Butler's wife, who was in attendance. He remarked in recognition of Mother's Day, "The mother gives life to children the new facility gives life to the people today. Healthy living is a high priority for the people and the facility. I am on the Health and Social Services Committee and would like to see elderly care centers and new facilities across the Navajo Nation built. I encourage everyone to use the facility especially to help fight diabetes."

Dr. Margaret Magee, Medical Director of the OPCC, stated, "My husband and I have been in Tuba City 22 years and three years before in Kayenta, but the last 17 years have been spent planning for this moment. Money was always an issue but after the hospital went to 628 all of a sudden things started moving along with some legal help," she said.

Magee thanked the senior leadership and the board for allowing them to build.

"The number of rooms for pediatrics, OBGYN, pharmacy and other departments has increased as well as room for existing services that were vacated in the older building. Walk in will combine with the emergency room eventually and someday patients will be able to see the same doctor with each visit. We want to commend the individuals instrumental in moving after closing on one Friday to be open on Monday morning such as the nursing staff, maintenance, IT and senior leadership as well as others that made it possible," Magee said.

Dr. Douglas Peters, Deputy Director/Chief Medical Officer from the Navajo area Indian Health Services, commented that "Since the move to a 638 hospital the board has been focused in providing quality health care for Hopis, Navajos, San Juan Paiutes as well as other tribes. The new Flagstaff Sacred Peaks Outpatient Center serves people from many different tribes. I remember the older building opening but the hospital is not just for Tuba City but regional from Navajo Mountain to Shonto to Gap and other areas. There are newer and better ways to treat people then there were 30 years ago but healthy living is the answer to better health care."

Walter Phelps, Navajo council member, stated, "The facility is a remarkable achievement and shows a trend in Native communities of using the Self Determination Act and the recent Title V status of TCRHCC are a way to make things happen. It seems like just a few days ago that we were groundbreaking."

Barbara Peters acknowledged all the artists that contributed art to the new building.

Joe Engelken, CEO of TCRHCC, commented he was touched that a patient came up to him and told him she felt the chairs were too close to the walls and could scuff the walls. The pride for the building is the way he would like everyone to appreciate the building.

"We are not leaving the Indian Health Service by becoming a Title V institution. The hospital is a community based accomplishment and linkage to the IHS is still is very important as well as community based stewardship with the state AHCSS program is important. Governor Brewer came out in support due to all tribes being serviced. This is a community based, 638, Title V cost effective building," said Engelken.

"Sovereignty used to be at the local level before Window Rock and Washington, D.C. and the building represents a return to the way things used to be decided at a local level. In Kayenta there will be a new state of the art facility built soon, which will also be a great achievement," said Jonathan Nez, Navajo council member.

The keynote speaker was Dr. Lori Arviso Alvord. Alford is the first Navajo female surgeon and author of "The Scalpel and the Silver Bear." She is currently is an associate dean of students at Central Michigan University and uses traditional ways to restore balance with modern medicine.

"The new facility marks a move to the next level. Everyone noticed when a lower cesarean section rate at the hospital was reported compared to private institutions. That shows a lower emphasis on surgery to generate revenue," said Alvord. "The community is already looking forward to economic development and much of it is already being done in Tuba City. Navajo women weave rug patterns from memory; it is all in there head. This is a powerful attribute to the Native people."

Grey Farrell closed by reciting a speech written by his daughter. The building was officially opened with a ribbon cutting ceremony by the senior staff and board members doing the honors. Entertainment was provided by an Apache group of dancers as well as local talent from royalty in the area to dance groups from local schools such as Tuba City Boarding School.

"The 638 status really makes a difference in making this happen. We should not have to rely on the government to build for us and many Native communities are taking advantage of self determination," said Alvord.

"This is very humbling after so many years and so many people being involved in the building of the facility. It is a humbling experience," said Engelken.