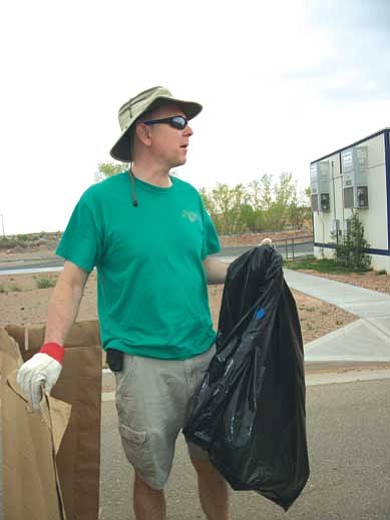 Tyler Tawahongva/NHO<br> Dr. Magee was just one of many Tuba City Regional Health Care Corporation (TCRHCC) employees who were out and about on Saturday, April 23 to clean up trash on the day after Earth Day. This clean-up day has been taking place for 10 years.

TUBA CITY, Ariz. - On April 23, the Tuba City Regional Health Care Corporation (TCRHCC) hosted a clean up day around Tuba City. Dr. Magee a doctor at the hospital for 20 years, stated, "This clean up day has occurred the last 10 years and wasn't attended as well this year due to some things happening such as the new hospital complex construction, but there were some individuals that were cleaning up around the hospital area as well as around town and even some times in Pasture Canyon."

He wanted to point out that his wife picks up trash every time she takes a walk and feels everyone should make an effort to pick up trash because every little bit helps.

"If everyone were to pick up trash when they take walks or just pick it up whenever they can the community would be much nicer," Magee said. "People see my wife picking up trash and ask if she is doing community service and she responds that she is merely picking up trash. If everyone were to follow her lead there would be a lot less trash in the community."

Another hospital employee echoed that sentiment and states that she also picks up trash when she takes walks.