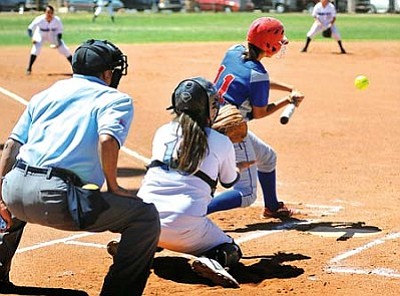 <i>Todd Roth/NHO</i><br> A member of the Holbrook Lady Roadrunners swings at a pitch from the Window Rock Lady Scouts on Saturday during the 3A North Region Tournament in Winslow. The Lady Roadrunners beat the Lady Scouts 9-3 and took third place in the tournament. They were bested by the Winslow Lady Bulldogs on Friday with a score of 9-0, which earned the Lady Bulldogs a chance to place in the championship game against the Tuba City Lady Warriors.

WINSLOW, Ariz. - The Winslow Lady Bulldogs defeated the Tuba City Warriors 15-1 on Saturday in Winslow to win the 3A North Region Tournament. Holbrook defeated the Window Rock Lady Scouts 9-3 to take third place in the tournament that morning.  All four teams advanced to the state tournament.

The Lady Bulldogs had shut out the Holbrook Roadrunners 9-0 on Friday to earn a spot in the Championship Game. Tuba City had beaten Window Rock 18-8 on Friday in the other semi-final game. In quarter-final games on Tuesday, Holbrook had beaten the Chinle Lady Wildcats 11-5, Tuba City had topped Monument Valley 14-8 and Window Rock had beaten Ganado 8-5. Winslow had earned a bye to the semi-finals by winning the regular season championship.

Megan Lymer was two for two with a double. Jamie Bollin and Dallas Zamora were both one for one. Gabby Stacey, Haley Hayes and Jaleisa Hayes were all two for three. Arianna Huerta and Melissa Jacobs were one for three.

In the 16-1 win over Tuba City, Kelley Pugh got the win working two innings and giving up a run on three hits. Mallory Smith allowed no runs on two hits in three innings. The game was shortened to five innings on the mercy rule. Winslow scored twice in the first inning, Monument Valley once in the top of the second and Winslow four times in the bottom of the second. A nine run third inning put the game out of reach.

Arianna Huerta was two for two. Karly Gilbert was one for one with a home run. Gabby Stacey and Haley Hayes were three for four with Hayes having a double and a triple. Becca Perez, Taylor Baca and Jaleisa Hayes were two for three. Megan Lymer and Melissa Jacobs were one for two with Lymer having a home run.

The Arizona State 3A Conference pairings have Winslow facing River Valley at the Rose Mofford Complex in Phoenix at 6 p.m. on Friday. The winner is to meet the winner of the 6 p.m. game between Window Rock and Show Low at 12:45 p.m. on Saturday. The winner of that game will advance to the semi-finals the next Friday.