Mitchell confirmed as director for Division of Community Development 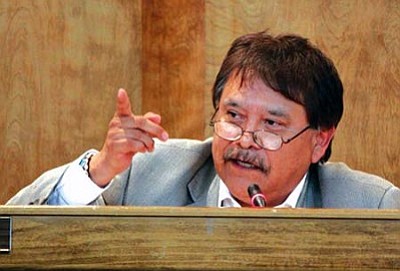 <i>Rick Abasta photo</i><br> Arbin Mitchell, director of the Navajo Nation Division of Community Development, gestures as he responds to questions from the 22nd Navajo Nation Council during his confirmation hearing on April 20. Mitchell was confirmed as division director and has led the division since 2005.

Mitchell introduced himself to the council in Navajo and spoke of his upbringing herding sheep and taking care of the land. He has been leading the division since 2005 and said the goal is to improve the quality of life for Navajo people. He said the division works with chapters in providing infrastructure such as power lines and water lines.

During travels to Washington, D.C. he was able to do exactly that, securing $48 million for school shortfalls at Tuba City, Wingate, Leupp, Wide Ruins and Mariano Lake. He was also able to bring in $5 million for scholarships.

Mitchell found success in procuring funding in other areas as well. He said $1.2 million was secured for the Bennett Freeze area through a line item because Washington, D.C. does not like earmarks.

"We've created that line item so leadership in D.C. can funnel monies into redeveloping the Bennett Freeze [area]," he said.

Funding has also trickled down to the chapter level.

"With the leadership of Mr. [LoRenzo] Bates, we managed to get $30 million in capital outlay using the general funds money and that hasn't happened since 1997," Mitchell said.

"We have done much work for our people at the chapter level for funding," he said.

Improving communications with the chapters is a major priority of the division and Mitchell said transparency is the goal. One tool utilized to that end has been the Woven Information Navajo Data (WIND) System, which is available to the general public at www.nndcd.org.

"We're the only division in within the Navajo Nation that does budgets online," he said. "You can log on to any chapter's budget and go back about six years and look at their budget. That's transparency."

Technology has been a main concern for the division and the Infrastructure and Capital Improvement Projects (ICIP) are no exception. The ICIP allows the chapters to complete their capital priorities online, prioritized from one to five years. The priorities are tied in with chapter resolutions, allowing for easy creation of Capital Improvement Plans (CIP).

Mitchell said the system allows for immediacy regarding queries on projects, whether they are power line or water line projects.

"We can just go to the system and say give me all these projects," he said.

Other technological innovations still under construction are the project authorization and project administration, which allows people to track work projects online. This will be used in tandem with the SAS Tracker, which will provide chapter expenditure and balance information.

Plans are to have the chapter monthly reports online as well.

"That way, we'll have a lot more eyes looking at the expenditures," Mitchell said. "It won't just be two people looking at the information. That's probably why you are missing funds."

The division currently utilizes GoToMeeting, which allows Mitchell and other staff to have online conferencing with chapter staff, reducing the cost for travel and time spent on the road.

"I'd like to meet with the delegates here that want to use that method to talk to your chapters," he said.

Mitchell said another area goal for the division that was revealed by the Nabik'iyati' Committee of the council is the Tribally Designated Housing Entity (TDHE) designation.

"[Housing] is something that all Navajo chapters want and right now, I only oversee BIA monies, which we only get $1.2 million," Mitchell said. "The rest of the money is with NHA and people always ask where is the money, where did it all go?"

Aside from housing, another major aim for the division is the Five Management System (FMS) and chapter certification through the Local Governance Support Centers (LGSC). Streamlining the certification process with the Navajo Nation Department of Justice and other approving offices has been critical for the certification of chapters, embodied by the FMS.

"For so long, we only certified 10 chapters," Mitchell said. "Then doing the streamline, we managed to certify 12 chapters within a year."

Five chapters are currently on the waiting list for certification and the division anticipates the certification of 30-40 chapters within this fiscal year. The Community Land Use Plan (CLUP) recently had two chapters certified and are looking to have more qualified.

The Local Governance Act (LGA) proposed amendments are another division priority. Mitchell said the overstrike and underscore portion of the amendments are completed and they are awaiting the Title II amendments to be finalized.