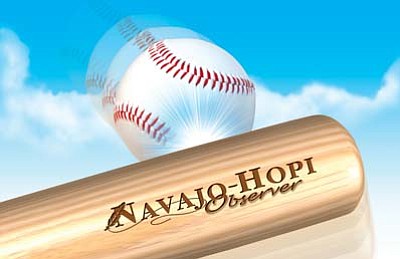 The Holbrook Roadrunner s defeated the Window Rock Scouts 5-4 on Saturday to capture the 3A North Region Tournament Championship. The Winslow Bulldogs pounded the Monument Valley Mustangs earlier that day 11-1 for third place in the tournament.

On Friday, Holbrook had defeated the Winslow Bulldogs 15-9 in a slugfest to earn their spot in the finals. The Roadrunners had defeated the Chinle Wildcats 21-1 in a one-sided affair on Tuesday. Window Rock had pounded the Monument Valley Mustangs 26-6 on Friday and had received a quarter-final bye by winning the regular season championship. Monument Valley had nipped Tuba City 7-6 in the quarter finals on Tuesday. Winslow had beaten Ganado 15-1 on Tuesday to reach the semi-finals.

The Bulldogs 15-9 loss to Holbrook on Friday came on a windy day when the Roadrunners pounded out 13 hits and benefited from four Winslow errors. Johnny Woods took the loss giving up 13 runs, only four of which were earned, on nine hits, five walks and a hit batsman in three and two thirds innings. Vittorio Sells worked the final inning and a third and gave up two runs, one of which was earned, on four hits and four walks. The Roadrunners got four runs in the second inning and Winslow got two back in the bottom of the frame. Four more runs in the top of the third made it 8-3 after Winslow scored once in the bottom of the frame.  Holbrook tallied five in the fourth inning and again Winslow got one back to leave the margin at 13-4. A run in the top of the fifth for the Roadrunners put the Bulldogs in danger of the game ending on the 10 run mercy rule but they scored twice to keep the contest going and tightened the lead to 13-9 in the bottom of the sixth.  Holbrook scored its final run the top of the seventh for the 15-9 victory.

Matt Smith got the 11-1 victory over Monument Valley in the third place game allowing one run on three hits and five walks. The game was ended after five innings on the 10 run mercy rule. Winslow scored four runs in the third inning after Monument Valley had scored one in the top of that inn9ng. A run in the bottom of the fourth made it 5-1 and six in the bottom of the fifth ended the contest on the mercy rule. The results left Winslow with a record of 18-11 going into the state tournament.

Holbrook scored the go ahead run in the top of the sixth on a double steal to take a 4-3 lead. A key play in the victory was Window Rock's failure to score a run in the bottom of the fifth when a runner missed third base and had to go back from what appeared to be an easy score.

Pairing for the Arizona State 3A Conference Tournament has the Roadrunners and Bulldogs meeting again at Surprise at 4 p.m. on Friday. The winner will play the winner of the Fountain Hills-Empire game on Saturday at 7 p.m. The winner of that game will advance to the semi-finals the next Friday.