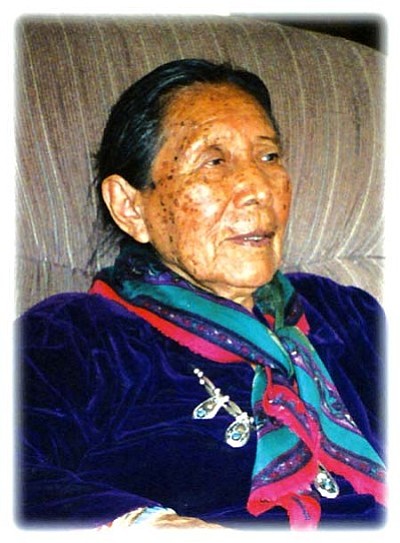 Ruby Begay Chee, 93, a great lady who was beloved by many, died April 27 at a Flagstaff hospital after a brief illness. She was born Feb. 28, 1918 at Grey Mountain, the daughter of Kenebah At'sidi and Luke Jensen, and the grand-daughter of Western Navajo Headman and silversmith Peshlakai At'sidi and Vera Standish, who were survivors of the Long Walk as children.

Ruby was storekeeper of Black Falls Trading Post, a homemaker, weaver, housekeeper at the Cameron Trading Post and nanny for the three Wilkinson children.

She is also survived by three sisters: Betty Huskon of Cameron, Dorothy Tsinnie of Tuba City and Della Yazzie of Black Falls along with many nieces and nephews. She was preceded in death by her husband Julius Chee and three sisters.

Funeral services will be held at 10 a.m. today (Monday, May 2, 2011) at the Norvel Owens Mortuary with interment to follow at Citizen's Cemetery.

Condolences to the family can be sent to www.norvelowensmortuary.com.