'Mayors For Meals Day' in Winslow 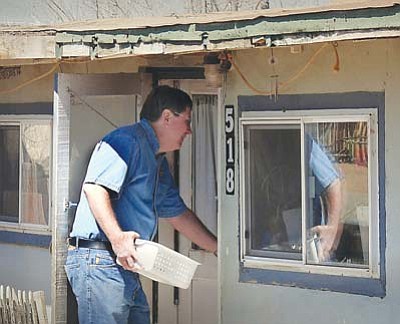 <i>Todd Roth/NHO</i><br> Winslow Mayor Robin Boyd delivers a hot meal to a local elder as part of a nationwide event called Mayors for Meals Day. Boyd was joined by Councilman Marshall Losey (pictured below) as they went door to door delivering meals.

WINSLOW, Ariz. - On March 23, Winslow Mayor Robin Boyd and Councilman Marshall Losey joined more than 1,000 elected officials across the country as they took a stand to raise awareness and fight senior hunger.

Mayor Boyd and Losey went door to door distributing food baskets to people in Winslow who were in need. Mayors for Meals Day event is part of a national campaign each March and is initiated by the Meals on Wheels Association of America (MOWAA), which seeks to raise awareness of senior hunger and to encourage action on the part of the local community.