Sinquah honored for service to NPC Governing Board 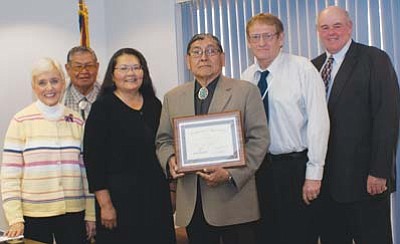 A.T. Sinquah (center) was honored by the Navajo County Community College District Governing Board with a certificate for his service representing District 2 on the board from January 2007 to December 2010. The certificate was presented during the board's regular monthly meeting March 15 in Holbrook. Recognizing his service were (left to right): Ginny Handorf, District 5; Daniel Peaches, District 1; Louella Nansonhoya, District 2; Sinquah; Dusty Parsons, District 4; and Chairman Bill Jeffers, District 3. A life-long educator, Sinquah said he enjoyed representing his constituents on the Hopi Reservation and would consider serving again once he "retired." "NPC provides an opportunity to the people to attend a community college within their district. I am proud that NPC can still provide these valuable services in times of budget cuts," Sinquah added.