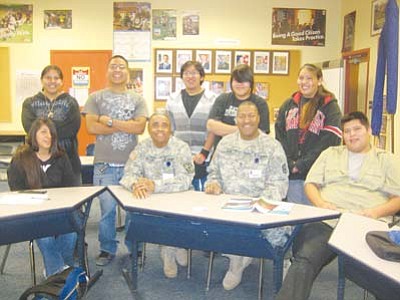 "We had some casualties, but it wasn't all of us," he said.

It wasn't until two weeks after the battle in Iraq that an officer told him that only the higher ranked officers knew that this was a suicide mission beforehand.

This is one of the stories that Logan can tell from more than 20 years in the military including the Army and the National Guard.

Logan brings this military experience to Hopi High School where he was recently hired as the new instructor to work under Maj. Phillip Taylor in the Junior Reserve Officer Training Corps program. The job became open when Sgt. Kevin Nance died in a car accident.

Logan said he felt good about taking the job at Hopi High School because there were three places he could have gone and he chose this one.

He will train the cadets on logistics, discipline and striving to do better. He teaches drill and color guard. He also orders and monitors uniforms to make sure they are kept up.

"JROTC helps build next year's leaders and role models," he said. Logan added that JROTC helps keep students away from bad activities such as joining gangs.

So far, Logan is happy with the Hopi High kids.

"They've all been respectful. Even the so-called bad kids are respectful," he said. "I taught in Colorado where a lot of the kids were disrespectful."

Logan said he likes the Hopi High School handbook because it details what students cannot do.

"It sets the kids up for success because they know the consequences," he said. "I like the structure because I came in during the middle of the year and all I had to do was look at the handbook."

His tours in the military have taken him to South Korea, Germany, Saudi Arabia , Iraq and Kuwait.

Aside from his years in the military, he taught art for eight years and worked as a truck driver. He has his teaching certification from Boces Pikes Peak and a degree in graphic arts from Eastern Kentucky University.

His wife Maxine teaches Spanish. They have two children. He was born and raised in Kentucky.