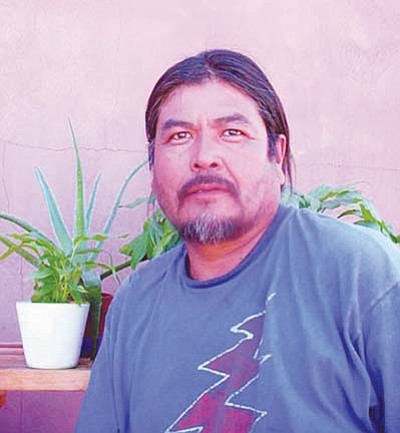 <i>Courtesy photo</i><br> Justin Boyd Willie was honored with an award bearing his name, which will be given to a lucky recipient at the Southwest Marketing Network Annual Conference on Navajo Nation Agriculture scheduled for March 30-31 in Gallup, N.M. Willie was always helping people start gardens, small farms and teaching them about agriculture, taking his Navajo teachings and ancient agricultural philosophy to community gatherings and schools as a guest lecturer and environmental advocate.

LEUPP, Ariz. - A benefit concert and show was held at Leupp Schools, Inc. to raise funds in support of the Justin Willie Humanitarian Award. Although a power outage threatened the success of the event, those who took a chance that the event would go on were treated to some top-rate entertainment and food.

Willie was a long-time traditional farmer and teacher who shared so much with the surrounding community. His dedication to others came naturally, embodied by two very special guests - Willie's father, Navajo Code Talker George Willie and his mother, Emma Jean Willie - Gold Star parents. Willie followed the same path as his father-and his brother who gave his life in Vietnam - as a Vietnam Veteran.

Emcee Tyrone Thompson and performer/teacher/cultural consultant James Peshlakai conducted the event. Peshlakai also served as one of the performers.

Thompson, a relative and peer of Justin Willie, is also a dedicated farmer.

Peshlakai's daughter, who amused the audience by chiding her father about his diet over the microphone, spoke of Willie with admiration.

"It is nice to be here, and to have the support of a lot of people," Jamescita Peshlakai said. "A year ago at the Mother Earth Gathering, people conceived the idea of the Justin Willie Humanitarian Award. Justin seemed to embody many of the values we spoke of. Many people are not recognized for the work they do and we thought we needed to honor Justin and the values he held."

The humanitarian award in turn will honor another individual who shares Willie's values and commitment to traditional ways of life, Peshlakai explained.

"This knowledge is important," she added, explaining that she had just returned from a conference in Washington, D.C. on hunger.

"When we talk about hunger, it is poverty," Peshlakai said. "What our bodies want are the nutrients and well-being of traditional foods, not USDA commodities. People are starving to death in big cities all around us. These were the issues important to Justin."

A group of family volunteers, including Roberta Franklin and Louise Walker, spent the day working where needed. Franklin was even enlisted as an impromptu comedy act to give performers a much-needed break.

Bobbie Ursin said that she had met James Peshlakai at Northern Arizona University when he worked there as a Resident Elder.

"He shared with us some winter stories, and we started a dialogue," Ursin said. "Jim came to my church for an interfaith event and brought his family."

Ursin brought Amanda Rader along with her, who, she said, hoped to develop a young adult education program based on traditional knowledge shared by individuals such as Peshlakai and Willie.

Rader, who once substitute taught in Ganado, said that she hoped to share what she called the miracles of our land.

"I would like to awaken lost youth to a new way of living by exploring the diversity of culture," she explained. "I'd like them to learn to slow down and listen."

Tom Tomas, who currently teaches at the STAR School near Leupp, worked closely with Willie in teaching a Native Sciences program presented at several area schools, including the STAR School and Little Singer Community School. The two shared a passion for agriculture, permaculture and traditional knowledge and together shaped the landscape across the communities.

Tomas presented excerpts from student letters illustrating how the knowledge given them by Willie has shaped the youth as well.

"That is how compelling corn is to us," wrote Keanu Jones. "Water is very significant because we need water, and Mother Earth needs water. The more water we get, the more muscular we get; so does Mother Earth and Father Sky. So we all need to take a stand for our water rights and our indigenous rights."

"I built relations between Mother Earth and by planting seeds, watering down the garden beds and spreading out the soil to plant," Briana Hudgins wrote, describing the experience as "welcoming."

Jay Begaye, who earned the Native American Music Award's title of "2010 Best Male Artist of the Year," donated his time to help raise money for the Willie award.

"A lot of people tell me that they never did meet their father," Begaye said. "I tell them to be strong and to pity your mother who worked hard alone to raise you."

Remembering the loss of his own mother, Begaye said that he also calls his drum his mother.

"I share the teachings of a drum," Begaye said. "I give water to my drum, and when I travel, I take my drum."

Davis spoke of how in the beginning, traditionally, the Navajo and Hopi people believe that the world was populated by only the plant and insect people-both important in traditional farming.

Davis and Satala performed a flute song, an Eagle Dance, a Horse Tail Dance and a Hoop Dance and ended by involving the audience in a Round Dance.

"The Hoop Dance is a dance that took me around the world," Davis said. "The hoop is one of the first symbols [of spiritual significance] before the cross."

Satala added to Begaye's description of the qualities of the drum.

"Everyone respects the drum in the same way," Satala said. "With the drum, we take care. There are times when you are beating the drum and you feel like you want to get up and dance."