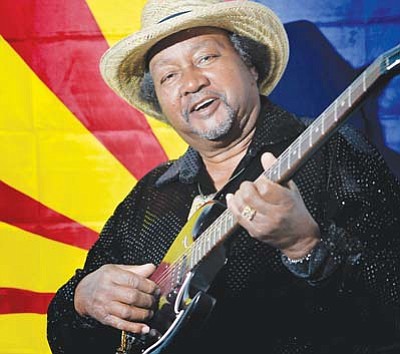 <i>Courtesy photo</i><br> Tommy Dukes of Winslow is one of Arizona’s finest blues musicians. Dukes started playing guitar and harmonica at age 10 and has never looked back.

WINSLOW, Ariz. - The one and only Tommy Dukes was inducted into the Arizona Blues Hall of Fame on Feb. 16, 1997. He's been a resident of Winslow for most of his life. He played in the 2007 Memphis International Blues competition and represented the state of Arizona well. He was interviewed on NPR. The list goes on and on. Yes, that's Tommy Dukes of Winslow, our home-grown, premiere blues guitarist and singer.

Dukes came to Winslow on a bus with his brother when he was just 10-years-old. The siblings came from Mississippi to live here with their mother. They left Mississippi sitting in the back of the bus, but somewhere along the way, the bus driver moved them to the front. Right then, Dukes could see things were going to improve.

Dukes' older brother was working at a lumber mill and was given a guitar from a preacher. Dukes appropriated the instrument since he could play it and his brother could not. It was Dukes' first decent instrument. Dukes listened to 33 RPM recordings of Jimmy Reed, as a way to learn the guitar and harmonica. He played both instruments at the same time. Dukes was 13-years-old at this time.

By age 15, he was playing in the Pint Top Buffet and Prairie Moon Bar for $18 a night. It was a trio, with Tommy on bass, KC Mattox on guitar and W.C. Westbrook on the drums. Dukes never looked back and has been a musician ever since. In 1990 Dukestook second place in the Long Beach Blues Festival, organized by Bernie Pearl.

More information is available at www.tommydukesblues.com.