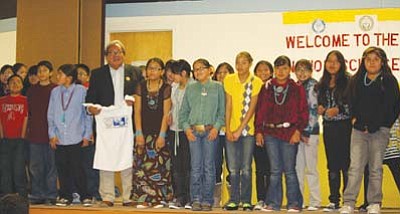 "I wish there was an event like this when I was your age," Speaker Naize stated as he addressed the kids.

"Don't forget to thank your teachers and parents for letting you participate and be proud of your efforts and the schools you represent," Naize continued. "Remember to take this great experience with you all the way to college."

The three-day event, hosted by the Department of Diné Education Office of Science, Math, Technology is broken into three grade categories from kindergarten through third grade on the first day, fifth through eighth grade on the second day and ninth through 12th grade on the third.

After setting up their exhibits, the entries are judged and the best five projects for each day are awarded prizes. The first group received Leapfrog Learning games and the second group was given iPod Nanos. The older teens have a chance to win iPads.

Registration is open to all students from across the Navajo Nation including public, private, parochial, charter and Bureau of Indian Affairs institutions. This year, nearly 180 students from 37 schools participated in the fair.