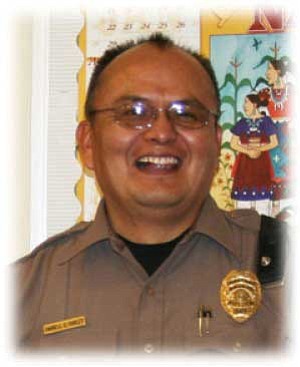 Mr. Curley was an adventurous person who enjoyed the outdoors - particularly fishing. He enjoyed movies. He loved the scriptures and reading in general. A people's man, Mr. Curley was a true leader who liked to socialize. He loved his grandson, Alex, and all children. He was kindhearted. He loved his job as a sergeant in law enforcement, and his church callings. Most importantly he was a great husband, father, son, grandfather, uncle and brother.

A funeral service will take place Saturday, July2, 2011 at 10 a.m., daylight savings time, at The Church of Jesus Christ of Latter-day Saints Stake Center in Chinle.

Memories and condolences can be emailed to the family at shputbeyal@hotmail.com. Any memorial donations can be made to the memorial account sponsored by Bank of the West for Sgt. Darrell Curley at any bank nationwide or by calling the Bank of the West at (928) 645-3223.