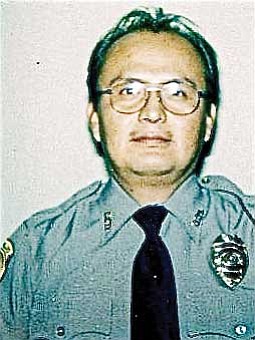 "We are truly saddened to lose one of our finest, Navajo Police Sgt. Darrell Curley. He was well known throughout the Four Corners region of each state, as well as by his constituent's throughout the Navajo Nation. Sgt. Curley proudly served on behalf of not only his family, but for the tribe and he has done so with great dedication, honor integrity and respect for all. As all law enforcement officers across the United States of America, he proudly served and dedicated his life to uphold the laws and constitutional rights of each citizen, in which he swore to protect and to serve," said Col. Billison.

According the Division of Public Safety, Sgt. Curley was recruited in February 1986, and later transferred to the Tuba City District and promoted to police sergeant in 2003. His many achievements included certificates for 20 years of service, commitment and dedication; outstanding contribution toward the recovery efforts from the Navajo Nation, Federal Emergency Management Services (EMS) and the Arizona Department of EMS; and commended by the Chinle Police District for his valued service and dedication.

Billison stated since 1979, a total of five officers have been fatally wounded by gunfire, and prior to Sgt. Curley was Navajo police officer Samuel Anthony Redhouse, in February 1997.

On behalf of Sgt. Curley's family, the Division of Public Safety and the Navajo Police Department are asking for donations from local businesses and communities to help cover funeral expenses. Monetary donations can also be deposited at any nationwide Bank of the West location, under the Navajo Police Sgt. Darrell Curley Memorial Fund. All contributions will be accepted at police districts in Window Rock, Tuba City, Chinle, Kayenta and Dilkon and Crownpoint and Shiprock, N.M.