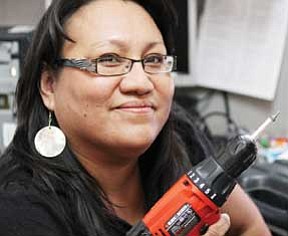 Photo/Rick Abasta<br> Principal information technician Sylvia Jordan has worked closely with Navajo chapters for the past five years, troubleshooting computers, installing software and providing training. Jordan said the division and chapters must drill down and find free services to continue the public access effort at the chapter houses.

Navajo Nation President Ben Shelly said the connectivity of the Navajo Nation chapters is a sign of the times.

"We are moving in a new direction and technology is uniting Navajo communities with the rest of the world," Shelly said.

"The Gates Foundation provided Navajo communities with technological infrastructure most cities and towns take for granted," Mitchell said. "Our Navajo chapters appreciate this major step into the modern world."

Chapter houses are all connected on the wide area network of NNDCD, through the Internet.

Since the millennium, chapters have served as community libraries and received funding from the Bill and Melinda Gates Foundation.

The foundation makes grants in three program areas - Global Development, Global Health, and the United States. For the United States, the mission to improve education includes the focus area of U.S. Libraries, via the Public Access Computer Hardware Upgrade Grant.

Norbert Nez, computer operations manager for the Navajo Nation Division of Community Development, said chapter houses flourished with technological advances in the last decade, thanks to the PACHUG funds.

In May 2011, NNDCD closed out the support and sustainability grant portion of the PACHUG, known as the closeout grant. An extension was granted and budget modification completed in February 2010.

The division closed out the funding with the creation of an online file management system, SAS tracking system, and server hardware and software upgrades.

The Gates Foundation's Native Americans Access to Technology program funded NNDCD $6,632,615 since 2000 to provide chapter houses with computers and Internet access. The foundation provided communities with two to four computers per chapter house.

"Since 2000, the Gates Foundation has made several grants to the Navajo Nation," Nez said. "The Division of Community Development took on the responsibility for all these grants."

The Gates Foundation has worked with 43 tribes in Arizona, Colorado, New Mexico, and Utah to provide computers, peripherals, training and technical support for a total investment in excess of $9.6 million, according to a news release from the Gates Foundation.

Denise Copeland, principal archaeologist for the Capital Improvement Office, said the grants provided by the foundation have increased the knowledge of technology at the community level.

"In the beginning, most of the chapters were afraid of computers. I don't think they have that perception anymore," Copeland said.

Nez and Copeland formed the Navajo Technology Empowerment Center in March 2005 to utilize electronic solutions to provide support and training to the chapters.

Both technicians joined the division when the Gates Foundation funded the PACHUG Replacement Grant in 2006, which addressed the obsolescence of the initial computers purchased in 2000.

"When we first began switching out the old computers with new ones through the Gates Foundation, there were over 400 computers," Willie said.

While the computers were a welcome addition to the chapters, Jordan said the reality of many Navajo communities was finding funding to maintain the systems. To address this issue, she trains chapter staff to troubleshoot their computers and find free resources that meet their needs.

"It's going to be difficult to try and service 110 chapters but we do the best we can," Jordan said. "It always feels good to help our chapters because resources are low and they don't have very many places to go."

Phase II of the PACHUG created seven computer labs on the Navajo Nation, with 10-12 computers at each location. With the completion of grant funding from the Gates Foundation, NNDCD continues to seek grants and other funds to sustain these programs that brought chapters into the digital age.

"The next step is to continue working with the chapters. The division has limited resources and we don't have these grants anymore," Nez said.

NNDCD is working with chapters to transition the support for the PACHUG devices. The division also continues to assist chapters with finding free services available on the Internet.

Nez said it's an opportunity for chapters to take responsibility and ownership of the devices and find funds for upgrades and keep the momentum in the public access effort.

"As long as we can get the chapters connected to the Internet, we have some services available on the web," Nez said. "I guess the term used these days is the cloud."

Through Internet-based, file services, chapters have created websites and email addresses for chapter business. From the division, the Woven Information Navajo Data System has provided chapters with a robust set of tools and transparency that's unrivaled in the tribal hierarchy.

"We started doing some e-Government applications, which eventually became known as the WIND System. It's a suite of web applications that work together," Nez said.

Nez foresees a leap forward in progression once the broadband efforts of Navajo Tribal Utility Authority are finalized.

"Looking forward, with the coming of all this fiber and wireless connectivity, you know the applications are just going to grow," Nez said.