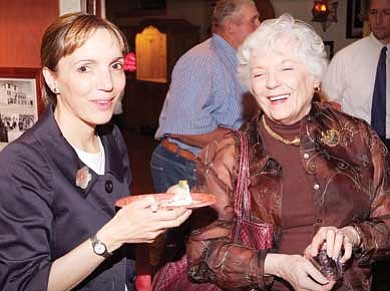 WINSLOW, Ariz. - On June 18 a special exhibit opened at La Posada Hotel in Winslow. The exhibit will remain there until Sept. 5. It's a combination of two interrelated themes. One is " Women of Winslow," which highlights the accomplishments of female Winslow residents who in the past, made major cultural and humanitarian contributions to Winslow. The other exhibit is related to the Arizona Centennial Celebrations and is an ongoing effort started in 2006, to document women's contributions to the heritage of Arizona. Current information on these exhibitions can be found here http://www.oldtrailsmuseum.org/ .

The Women of Winslow exhibit is made possible by The Old Trails Museum aided by Winslow Arts Trust and the Winslow Harvey Girls. The Arizona Women's Heritage Trail exhibit named "How Splendid is Our Past" is a traveling exhibit provided by "Arizona Women's Heritage Trail" (AWHT) who are dedicated to telling the wonderful stories of remarkable women in Arizona history. AWHT presently has a driving tour for Phoenix and a walking tour in Tucson highlighting locations of the famous individual Arizona Women.

Two talks were given about the important historical women of Arizona on June 17 and 18 at La Posada. The first talk was given by Joan Meacham, Director of AWHT in Phoenix, on Friday evening. The second talk was given by Dr. Mary Melcher, curator of AWHT's traveling exhibit "How Splendid is Our Past".

The current exhibit shown in the lobby of La Posada Hotel highlights a number of major historical figures in our past including Mary Colter, The Harvey Girls and Nampao, the famous female Hopi potter, (1860-1942). Also in this presentation in La Posada lobby are a number of important Winslow women of the past, including Mrs. Nagle, an early Police Commissioner, and Elsa Neva Setima Lomawima Adams, graduate of the early State College in Flagstaff and reservation elementary school teacher for 30 years.

These women and their stories are on display in the lobby of La Posada Hotel Winslow with photographs and descriptions of their achievements. The exhibit is professional presentation and interesting to anyone interested in Arizona History.