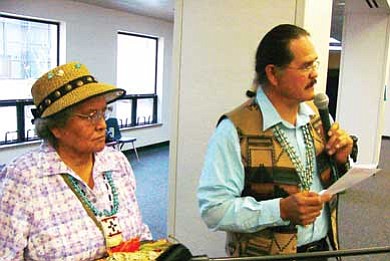 FLAGSTAFF, Ariz. - Staff members, friends and family gathered to celebrate the 40th anniversary of Native Americans for Community Action (NACA). Guests of the benefit event, entitled Abalone Mountain Gala, were treated to entertainment, a delicious feast and the opportunity to acquire top of the line arts and crafts, including a signed print by Baje Whitethorne Sr., one of the VIPs of the evening. Proceeds from the benefit will help fund the numerous services provided by this unique organization.

VIPs from the past and present joined Master of Ceremony Steve Darden in the commons area of Flagstaff High School on the evening of June 3. Darden, along with co-founder and board member Bob Lomadafkie, recognized those in the audience who played a part in the development of NACA.

Mary J. Kahn, who along with her husband, the late Franklin Kahn, was also among the founders of NACA.

"This woman, my shima (my mother), she and her late husband made their home available for ceremony," Darden explained. "We [NACA] always had our hand out; they donated numerous items from their store (the Turquoise Hogan, one of the few Native owned arts stores in downtown Flagstaff) and their own pocket."

Darden went on to credit Mr. Kahn with the development of the NACA logo, which includes the foot tracks of humankind, bear, and the deer.

In introducing Lomadafkie, Darden affectionately spoke of him as "My dear friend, former boss, neighbor, sounding board - we have very often disagreed, but we never sought each other out without retreating for prayer."

"The genesis of NACA took place in 1968, '69," Lomadafkie said. "I was part of a group of Native American students involved in trying to develop a Native American studies program at NAU. During a conference examining Native time, Kurt Nordwall commented, 'You don't have an Indian Center in Flagstaff. Would you mind talking to people about starting one up?'

"I picked on people I knew from when I was a little kid," Lomadafkie continued. "We would hear discussions in family meetings, and it would always lead to 'we are not being treated right by the community. We need to address these concerns.' We formed an ad hoc committee that included people like Martha Blue, Ben Hufford and others. We also had support from Francis McCallister, who was influential in the arts. We've had great support; a nice association with the community [of Flagstaff]."

Speaking from own culture, Lomadafkie noted that Hopis have always been runners, and that running was an important part of the successful 1680 Pueblo Revolt.

"Running was good for the individual, but also for the greater good," Lomadafkie said. "I will be one of those running tomorrow; I may be the one you pass by - be kind."

CEO Dr. Rob Robin also added his voice to the history of the organization, and expressed his pleasure and honor to be a part of NACA. He went on to point out the many services available through NACA - and not just medical and social services.

"NACA is a very unusual organization," Robin said. "It is unusual for such an organization to have a focus on advocacy. There is a lot of social action ascribed to its title - Native Americans for Community Action."

Robin thanked all in attendance, including the runners who would face the Sacred Mountain Prayer Run the following morning.

"Running is another aspect in the tradition of Native Americans," Robin said. "All proceeds from the run will go to emergency social services, medical emergencies - NACA is there to lend a hand. We are not just a medical clinic - we serve all ages and population groups across a wide spectrum."

Clifford and Mary Lomahaftewa and James Peshlakai were also remembered for their work in the community.

Denise performed the Jingle Dress dance; afterwards, Darden explained that there were 365 cones on each dress, reminding people to pray every day and give thanks for those that are and those that will be. Danielle performed the Fancy Shawl dance, and Tyrese performed the Boys Fancy dance. Darden described the dances as healing dances.

Miss Hopi 2010-2011 Johnetta A. Honie expressed that it was an honor to be included in the event. After a brief speech, Honie sang a hauntingly beautiful song advising young people to listen to their elders.

"They only want the best for us," Honie said. "At my age now, I can see that [their words] were really important."

The event ended with the announcement of silent auction winners.

The event was scheduled to end at 8:30 p.m, but Lomadafkie's earlier note of Native time held true - as folks left the Flagstaff High School campus closer to 10:30 p.m.