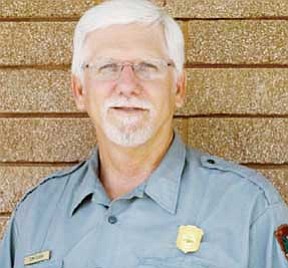 DENVER, Colo. - Tom O. Clark, superintendent of Canyon de Chelly National Monument in Arizona and a 28-year veteran of the federal government, has been appointed to additional, supervisory duty over two nearby units of the National Park Service (NPS).

National Historic Site and Navajo National Monument, all in Arizona. He was named recently to the post by John A. Wessels, director of the eight-state Intermountain Region of NPS. In his expanded role, Clark will continue to be stationed at Canyon de Chelly.

"In just three years at Canyon de Chelly, Tom has worked with park staff to improve our partnerships with agencies of the Navajo Nation, local Navajo chapter governments, the Bureau of Indian Affairs, canyon residents and tour operators," Wessels said. "This experience puts Tom in a great position to improve our stewardship of Canyon de Chelly, Hubbell Trading Post and Navajo with shared efficiencies across park boundaries."

"I am looking forward to my expanded role within the Southern Four Corners Group and continuing to improve the effectiveness of joint operations at these three unique and challenging units of the National Park System," Clark said. "I am privileged to work with dedicated staffs and interested partners at Canyon de Chelly, Hubbell Trading Post and Navajo."

Before taking the helm at Canyon de Chelly, Clark was chief of Resource Management and Science at Capitol Reef National Park in Utah, a post he held for 13 years. While there he developed Capitol Reef's General Management Plan, the park's key management blueprint. He also helped prepare strategies for the Northern Colorado Plateau Inventory and Monitoring Network, and he worked with the Bureau of

As Southern Four Corners Group superintendent, Clark is responsible for the management of three NPS units with a combined area of 84,360 acres, staffs totaling more than 70 full-time positions, and annual operating budgets totaling more than $3.5 million.

All three parks in the group are within the Navajo Reservation, the largest in the U.S. At the base of sheer red sandstone cliffs, Canyon de Chelly National Monument's canyon-wall alcoves contain American Indian sites that date from more than 4,000 years ago to the present. Contemporary Navajo families still live and farm in the canyon. Hubbell Trading Post National Historic Site is the oldest continuously operating trading post on the reservation. Little changed since 1878, it represents an economic and cultural bridge for many Navajos. Navajo National Monument administers three distinct and separate sites within the reservation - the ancient cliff dwellings of Betatakin, Keet Seel and Inscription House.