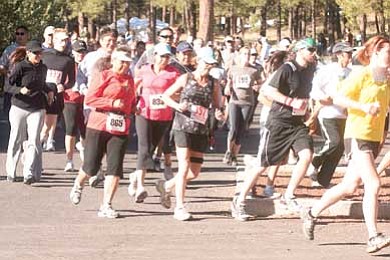 Photo/John Running<br> On June 4, 243 runners of all ages left the starting line of the 28th Annual Sacred Mountain Prayer Run.

FLAGSTAFF, Ariz. - "I really appreciate you all being here again," Rose Toehe said. "It feels like a family reunion each year, when I look out over the crowd." This is an accurate assessment of the Sacred Mountain Prayer Run, evident by the meet-and-greet attitude among the hundreds of people who assemble for this race annually.

Toehe, Dorothy Denetsosie Gishie and other staff members from Native Americans for Community Action (NACA) put together the 28th annual running this year on June 4. For many years it was a solo event, but over the years other groups have joined together to assist in putting on a successful event. NACA has collaborated with the Annual Flagstaff Summer Running Series (AFSRS) and the Tuba City Health Promotion Diabetes Prevention Program (HPDPP) to reach a broader audience.

The Sacred Mountain Prayer Run is the second in a series of six in the Annual Flagstaff Summer Running Series, according to Sabrina Blackledge.

"The series is getting more popular every year," Blackledge said the previous evening. "All are benefits. The money goes to each organization. It's really a community based event, and the community benefits."

The Prayer Run is unique due to the focus on running as a form of prayer among Native peoples.

Nan Talahongva illustrated this fact as she and her daughter, Patty Talahongva, prepared to bless the race and the runners. Patty scattered corn meal; then her mother said a prayer and sprinkled the racers with water.

"It is a beautiful morning," Patty said. "I am honored to be here. Hopi are strong and powerful runners. This is a spiritual endeavor; it is an honor to represent Hopi."

"Thank you all for running," Nan added. "Thank you for supporting your family."

As the Support Services Director, Gishie pointed out that the money raised goes directly into the programs offered by NACA.

"I really thank the runners for coming out," Gishie said. "Through them, we are able to buy bus tickets for people stranded, to give donations to the local food banks, and for supporting persons in urgent need."

Kelvin Long, a local activist and director of the organization ECHOES (Educating Communities while Healing and Offering Environmental Support) was one of the runners who considered the 5k event a prayer.

"I ran to pray," Long said. "I ran in prayer for the healing of our culture and sacred lands so the young people will learn our ways, to lead us. That is what I prayed for."

"I ran to promote the health of the Navajo People," Brenda Gene said. "[As Natives] we give a different perspective to running. Running is not just for exercise, but can be for healing too."

Gene is the wellness coach for the NACA Wellness Center.

"This represents the 'Just Move It' event for Flagstaff," Holiday said. "This is the fourth event in twelve."

Holiday explained that her office has partnered with a lot of different organizations.

"It makes a big difference when we are able to partner with different organizations," Holiday said. "We can reach a lot more people.

Jerilyn Slim, the coordinator of the Just Move It program at Tuba City, agrees.

"We are also encouraging people to bring out their animals to work with them," Slim added. "We tell people that they can exercise their animals and themselves as well. Animals are an important part of our community.

"We are honored to work with NACA," Slim said. "We are hoping this year was a success for them, and that we helped them. This was a great opportunity for us as well."

One runner contributed two of the awards-striking mixed media pieces of glass and stone featuring a warrior and the Sacred Peaks in the background. Adrian Wall, Chippewa/Jemez Pueblo, clearly understands one underlying theme of the Sacred Mountain Prayer Run.

"We have our own sacred mountains in New Mexico, and I understand the concept of running for prayer."

Wall, a student of the Institute of American Indian Art, has worked with glass for over two years. He has been a sculptor for over twenty.

His pieces served as the first place prizes for the 5 and 10k events.

NACA CEO Rob Robin sees the Prayer Run as being very different from other races in the Flagstaff Summer Running Series.

"This is the only race in the circuit sponsored by Native Americans with the vast amount of the runners are also Native Americans," Robin said. "It has that spirituality; the reverence; the humility; the recognition of the universe. We begin the race with a blessing. I think the Native and non-Native runners have appreciation for that, and the long tradition of Indian running.

"Physical fitness brings other forms of wellness, including spiritual wellness," Robin continued. "We pulled together a talented staff; well qualified, dedicated and genuinely interested in improving other's lives. Our clientele has responded in kind. They're the ones that make this happen.

"Positive energy combined with good, measurable outcomes; comparing the people involved in our programs before and after-our best case practices are shown to work."

I would like to thank my friend John Running for permission to use his work with my article-S.W. Benally