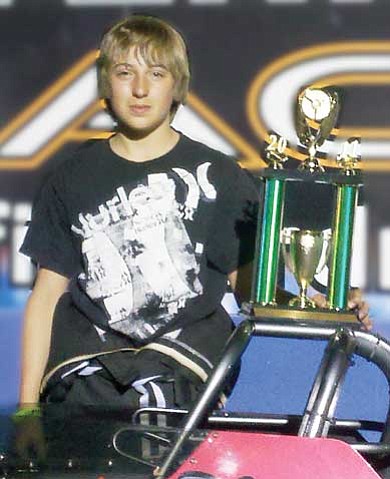 Todd Roth/NHO<br> Hayden Walton proudly displays a trophy he won March 5 at Firebird International Raceway in Chandler. Walton died after he was injured during a Little League game on May 31.

WINSLOW, Ariz. - A memorial service was held on Wednesday June 1, for 13-year-old Hayden Walton, at the Little League Field in Winslow. Walton was fatally injured when a ball struck his chest on the evening of May 31 at the same baseball diamond. Flowers were placed at the Home Plate in honor of Walton. His League President Dale Thomas and Vice President Jamie Jones gathered Hayden's teammates on the field, where they held a memorial service and prayer for Walton. The stands were full of mourners as were the surrounding field area.

Information on services was unavailable at press time.