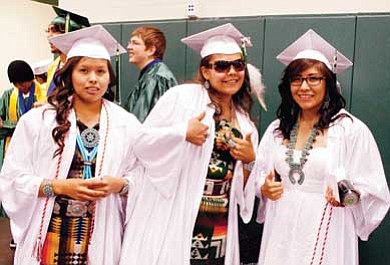 The TCHS Junior ROTC color guard posted the colors, including the Hopi, Navajo, Arizona and U.S. flags. Once again the Tuba City JROTC Drill Team won the Arizona State Competition and the JROTC Marksmanship Team placed first in the Arizona State Junior Olympic Match and will be the only team representing the State of Arizona in the National Junior Olympic competition.

The Mistress of Ceremonies, senior classmate Marriah Sampson, introduced the team of students who opened the graduation with invocations of the representative languages at TCHS. Amber Poliveyuma gave her opening prayer in Hopi. Justin Ben, dressed in traditional Dine headgear, said his prayer in excellent Dine Bizaad (Navajo). Stephanie Wong, originally from the Philippines, gave her prayer in fluent Filipino and McHale Butler led the last prayer in English.

Members of the graduating class gave the Welcome Address, Judy Throssell, the Thank You Address, Nicole Nelson-Shepard, the Salutatorian Address, Dennis Klain and the Valedictorian Address, Lauren Newland. Each of the student speakers congratulated their classmates and challenged them to continue the adventure of life through future learning. Graduates where also reminded to always remember where they came from and never forget those who help them accomplish their dreams.

The Keynote Address was given by senior class language arts teacher Thomas C. Jones Jr. Jones, a belagaana, has been a resident of Tuba City since 1992 and a teacher at TCHS since 1998. He is a graduate of Harvard University and Columbia Law. Mr. Jones opened his speech with an introduction in Navajo with cheers from the crowd. He reminded the class of the TCHS accomplishments from the past year including the TCHS JROTC championships, the academic achievements including "a record 87 students" who took "118 College Board Advanced Placement exams."

Jones spoke highly of graduate William (Billy) Orman who was nationally recognized in cross country and track and field. Jones reminded the crowd that "this evening Orman will be attempting to break the national high school record for the most coveted of all track and field records - the metric mile race, 1,600 meters. Orman will be attending Harvard next year.

Jones closed his speech to cheers and applause with "Once a warrior, always and warrior" and "Bon Voyage."

The presentation of the class was made by Interim Principal Mr. Adelbert Goldtooth and accepted by Governing Board President Judy Begay. The Presentation of the Diplomas was made by social studies teacher and senior class sponsor, Kino Reed. The names of the graduates were announced by guest Jeanetta Klain as they received their diplomas and shook the hands of the dignitaries and crossed the stage.

Fellow graduate, Justen Billy, led the graduates in the changing of the tassels.

The Bendiction was given by Acting Dean of Students, Ross Williams.

The graduates left the Warrior Pavilion to the tune of "Walking on a Dream" where they were greeted by family and friends on the green grass outside.