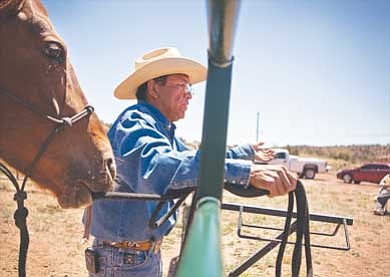 GANADO, Ariz. - More than 30 people traveled from far and wide to see the Ty Jones Horsemanship Expo in Ganado. Held on May 15 in Ganado's Shepherd Horse Stables, the expo featured a handful of expert horsemen giving lectures and demonstrations on all things equine.

Presented by famed Native American entertainer Jay Begaye, the expo prominently featured master horseman Ty Jones of Flagstaff. Jones grew up in central California but credits his horse expertise to learning from a distance and soaking up knowledge as a kid whenever he was around horsemen.

With the crowd gathered around a small square corral Jones set up, they watch him as he trains a young and easily spooked horse. Through the aid of a small wireless microphone on his shirt lapel, Jones simultaneously spoke to the crowd and horse expressing what he expects from the latter. in his demonstrations Jones talked and demonstrated the proper way to develop ground control, how to start a new colt and to trailer load it as well as fundamentals like moving backwards.

Jones says he got into the horse training and education business to try to bring back some of the horse knowledge the Navajo Nation has lost.

"For centuries, we Native Americans were great horsemen and somewhere we lost that connection, it faded away from us and we lost a lot of knowledge but we are in the path of bringing that back," Jones said. "It's sad how it happens now. They go ahead and buy their children a young horse and they don't know how train it, ride it. An uncle or a family member will catch wind of this and come rushing over, throw a saddle on there and slap the horse and away it goes and that can be a horrifying experience for the horse and child and that can be the end of it."

One of the spectators enjoying the show with his family was Donovan Walker of Tuba City. He and his family brought their own chairs but also left with gifts after his son was rewarded by Jones for correctly answering a series of horsemanship questions.

"I came so my kids can learn. The demonstrations will teach them how to be safe and I can call it a family outing so we'll have fun," Walker said.

Organizer Jay Begaye put on the event because he feels being around horses is a blessing.

"They have a lot of power but most people don't know it," Begaye said. "It's for the kids so they can have a good life and not be stressed. If you have stress and are going through hard times this is a place to be. Just look at how the horses think and it will give you a lot of blessings."

Above all things are personal and horse safety Jones said. He stressed to the crowd that you don't have to pay thousands of dollars to get experience and some training but all you have to do is show up to educational events.