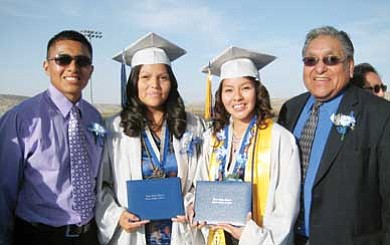 • Don't be afraid to take risks;

• Don't let doing something wrong stop you. Instead, learn from the mistake; and,

• Don't let other people tell you that you can't do something.

"When people criticize you, don't listen," the chairman said. "Be proud of who you are and call your mom at least once a week."

Chairman Shingoitewa offered his comments during the Hopi High graduation ceremony May 26 at Bruin Stadium. Hopi High had 101 graduates who braved the wind to get their diplomas as about 3,000 friends and family members looked on.

The chairman said regardless of whether leaders agree they need to remember that "These are our children and we need to take care of them."

Chairman Shingoitewa recounted how he graduated from high school 51 years ago, so he knows how the graduates feel.

"Look at all the people behind you. They're yelling because they are proud of you," he said. "Now, you face the real world."

"Whether your number one or number 100, you have something in common: You completed your high school education," he said.

Principal Gilman said this graduating class had several achievements including eight members graduating who served the National Honor Society; others who excelled in music, arts or broadcast radio; a girls cross country team who has won four consecutive state titles and 19 overall; and a boys cross country team that has won a national record 21 straight state championships.

He praised Justin Secakuku for winning the individual state cross country championship. He emphasized that this was Hopi High's 25th anniversary and many changes in technology have been seen throughout the nation during this time. He noted that the green revolution has started.

"This calls for innovation and entrepreneurship to compete, so go out and maximize your potential," he said.

Michael Adams, a 2004 graduate from Hopi High, served as the keynote speaker. He went on to graduate from Occidental College in Los Angeles and is now a student in the counseling program at Northern Arizona University.

Adams spoke about overcoming going to college in a big city and living elsewhere by remembering his family, his clan and his responsibilities as a Hopi.

Whitney Damgaard received the Kathy Steele Memorial Scholarship. Damgaard, who is a Bahana, accepted the scholarship in the Hopi language. She thanked her family, especially her mom. She plans to attend Doan College in Nebraska.

Salutatorian Justin Secakuku, who earlier had the graduates doing the wave, told his fellow graduates that if Damgaard can speak Hopi that they can do it too. He led an ovation for the graduates' parents before telling his classmates that they can't get anything done by sitting on their butts.

"The choice lies with you. It's up to you what you want to pursue," he said.