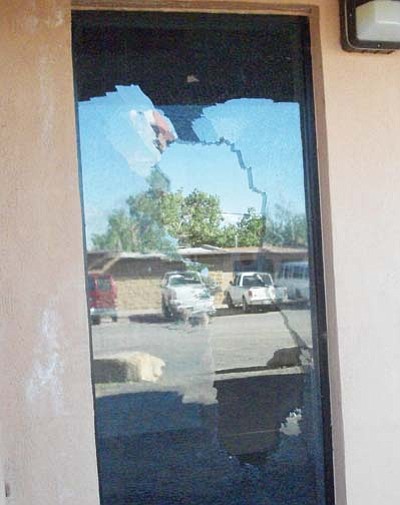 Tyler Tawahongva/NHO<br> Broken glass is left behind after vandals damaged the building.

HOPI, Ariz. - In the last month two facilities, the senior centers in Moenkopi and Hotevilla ,have been vandalized. During the July 4 weekend vandals broke eight windows at the center. In Hotevilla on July 13, vandals broke a window at the Youth and Elderly Center.

Dorothy George, Moenkopi Senior Center President, stated, "It is believed more then one individual was involved in the damage and that an award has been offered to help in the arrest of the individuals involved."

According to individuals in Hotevilla, it is not known who or how many individuals were involved. The police were called and a report was filed.

Recently at a the Upper Village of Moenkopi Law and Order Committee meeting it was discussed that there was a need for a curfew law that would minimize the youths roaming the village late at night. There was discussion about the possibility of holding parents responsible for things such as graffiti and vandalism.

"If juveniles were involved in the vandalism then there parents should be responsible for the damage," said George.

Individuals are encouraged to contact the Hopi Police Department if they have any information about the incidents in both villages.

Jeremy King former Upper Village of Moenkopi Law and Order Committee stated, "There have been efforts to prevent these types of situations from occurring and that actions need to be taken...This type of damage will not be tolerated and will be prosecuted to the fullest extant of the law. Since the damage didn't exceed a certain amount it will not be prosecuted at the federal level. There is a $400 reward for information leading to the arrest of the individuals, but many times people are afraid to come forward with information."

We Tip is an anonymous crime hotline that provides a toll free number to report crimes such as drugs, burglary, theft, gang violence, vandalism and graffiti. For more information visit

Another measure to help fight crime is the updating of Ordinance 21, the legal ordinances for the Hopi Reservation. According to Wayne Kuwanhoiyama, these Ordinance are almost ready for public presentation and then will be presented to the council. The ordinance has not been updated for at least 30 years.

In a recent meeting of the Law Enforcement Task Team Gov. William Charley voiced his concern with the response time to crimes committed in Upper Village of Moenkopi.

"When a call is made to the police in Keams Canyon it may take an hour to get a officer to the crime scene when they are just on the other side of the village," said Charley.

After repeated calls to the Hopi Police Department by Linda Honanie, no one arrived to take a police report. By the time they arrived a few days later the evidence no longer existed.

In another incident at the Senior Center the individuals were arrested and were released because the prosecutor failed to appear. As a result, the case was dismissed.

In Shongopavi Village there was an incident where 20 cars had their tires slashed, there are still no arrests in this crime.

"The Law and Order committee is looking at drafting village ordinances for curfew as well as graffiti," said King. "I would also like to see parents more responsible for the actions of their children...Measures will have to be taken to address these situations, and with the help of the Governor and other community members there will be more action taken to address this issue and bring it to the Tribal council."

The next law and order meeting is Aug. 11 and he encourages everyone from the Moenkopi village to attend to discuss these issues." For any information regarding the vandalism call the Hopi Police Department at (928) 737-2233.