Lutzick elected to the Museum Association of Arizona's Board of Directors 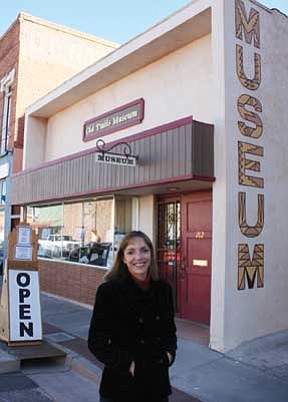 During her two year-term, Lutzick will act as liaison between the MAA and its membership in Apache, Coconino, Mohave, Navajo, and Yavapai counties. In addition to facilitating two-way communication between the organization and its members in the field, Lutzick will publicize MAA activities and encourage new and ongoing membership. Her term of office is two years, from spring 2011 to spring 2013.

Lutzick became director of the Old Trails Museum in November 2010. She was on staff at the Arizona Humanities Council (AHC) from 1999 through 2008, and first came in contact with the museum as one of six host sites for AHC's 2007-2008 tour of the Smithsonian traveling exhibition Between Fences. In addition to her half-time work at the museum, Lutzick presents on Winslow-related topics as a member of AHC's Road Scholars Speakers Bureau.

The Old Trails Museum is located at 212 Kinsley Ave. in Winslow. For more information, call (928)289-5861 or visit online at www.oldtrailsmuseum.org.