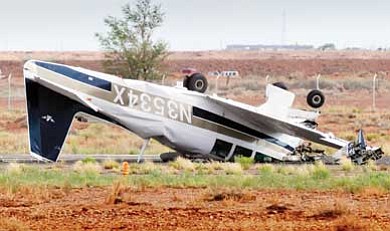 Todd Roth/NHO<br> An airplane remains upside down after crashing July 17 at the Winslow Lindbergh Regional Airport.

WINSLOW, Ariz. - At approximately 10:30 a.m. on July 17, a single-engine aircraft crashed upon take-off at the Winslow Lindbergh Regional Airport. The two occupants were killed upon impact. According to the Federal Aviation Adminstration (FAA), the single engine "Mooney M20F" aircraft came to rest at the end of the runway. The plane did not catch fire. The FAA and National Transportation Safety Board will be investigating and will release official preliminary results within a couple of weeks. It will be months before a probable cause is released.

It is unofficially reported, that the aircraft was from Colorado Springs. Apparently, the aircraft stopped in Winslow to refuel. The Mooney crashed on take-off after refueling.

A Winslow resident and pilot, Jack Weldon, witnessed the incident. He said that the Mooney was attempting to take-off, began rocking back and forth, then turned upside down. Weldon said that the plane may have stalled upon take-off since "a Mooney has to get off pretty (good) ground speed or it will stall. They wing-over and nose down."

Other contributing factors may Winslow's altitude of 5,000 feet coupled with summer high temperatures, which produce very thin air density. Also the Mooney is considered a "performance aircraft" in the world of private flying and as such, is not as forgiving to mistakes, as high-wing slower craft.

The bodies were removed around noon and as of 4:30 p.m. July 17, the aircraft was still resting upside down as investigators and Winslow officials documented the scene.